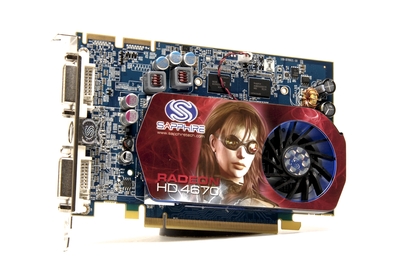 The Sapphire HD 4670 is an entry-level graphics card that casual users will be sure to love. Like its midrange and high-end siblings, it offers an exceptional performance for the asking price. Another Radeon winner.

The Sapphire HD 4670 is an affordable ATI graphics card aimed at the middle of the mainstream market. Like the rest of the Radeon R700 series it is characterised by an excellent cost-to-performance ratio that blows nearly everything else in its price range out of the water. Granted, in the HD 4670’s case this merely makes it a big fish in a small pond, but for $136 its performance remains unbeaten. It will be particularly suited to gamers on a budget, as well as multimedia enthusiasts with a penchant for high-def video.

While vendors love to wax lyrical about their high-end graphics cards, the majority of their revenue actually comes from the mainstream sector, which makes the HD 4670 a good candidate for the People’s Choice award. As the ‘4’ in its nomenclature implies, this latest GPU is a close relative to the ATI Radeon HD 4850 and ATI Radeon HD 4870: two mid-range graphics cards that wowed just about everyone who crossed their paths.

Being a less costly alternative, the HD 4670 lacks some of the 4800 series’ grunt but it still packs a fair old punch for the asking price. The new 55nm RV770 chipset comes equipped with 514 million transistors, 320 stream processors, 512MB of GDDR3 memory and a (slightly neutered) 128-bit memory bus. Meanwhile, its core clock speed stands at 750MHz, with a memory clock speed of 1000MHz (2GHz effective). The Sapphire version, reviewed here, is identical to the ATI reference board, although factory-overclocked editions should also be appearing in the near future.

When it came to our gaming benchmarks the HD 4670 performed solidly for a graphics card in this price range, with results that compared favourably to EVGA’s e-GeForce 9600 GSO (Dual-Slot Edition) (an NVIDIA-based offering with a street price of around $190). As with the EVGA card, we ran our benchmarks on a Vista 32-bit machine equipped with 1GB of DDR2 RAM, a 750GB Barracuda ES hard drive and a 2.66GHz Intel Core 2 Quad CPU. As you’d expect, the average frame rates on offer won’t cause enthusiast-salivation, but for an RRP of $136 they remain mightily impressive nonetheless.

In 3D Mark06, the HD 4670 returned an overall score of 8254, which is a solid result for a sub-$150 card. In our DirectX 9 gaming tests it achieved an average frame rate of 54 frames per second (for F.E.A.R.) and 174fps (for Half-life 2). These results were both faster than the EVGA card, which averaged 51fps and 163.27fps, respectively. When we ran the DX10 game Call of Juarez, the HD 4670 returned an average of 25.4fps. Again, this was slightly faster than the e-GeForce 9600 GSO, which averaged 22.1fps. On the other hand, Crysis proved something of a disappointment with the HD 4670: it averaged just 13.97fps, compared to 23.9fps from the EVGA card. (To be fair, though, Crysis has never been kind to AMD. Even when using high-end Radeon cards results have been erratic at best.)

In any event, it can clearly be seen from the above results that the HD 4670 offers a fair amount of grunt for the asking price. (Indeed, when we reviewed the e-GeForce 9600 GSO a few short weeks ago we considered it to be an excellent value choice; this gives a good indication of how dirt-cheap the HD 4670 really is.)

Along with its solid gaming capabilities, the HD 4670 is a proficient performer when it comes to high-definition multimedia. The card comes equipped with an upgraded hardware video decoder (ATI’s UVD 2.0), which significantly reduces CPU load during HD playback and supports picture-in-picture capabilities (both VC-1 and H.264/AVC codecs are supported). Also onboard is the latest version of Avivo HD technology. This is a first-party video platform that enhances the quality of video content, including automatic DVD up-scaling and contrast/brightness adjustments. Naturally, most of these enhancements can also be applied to games. In addition, the HD 4670 also features support for integrated 8-channel audio for both HDMI and DisplayPort. All in all, this makes the HD 4670 a solid choice for home theatre enthusiasts.

The HD 4670’s peak power consumption is rated at just 70 Watts, which should put a smile on hippies' faces everywhere. Furthermore, you don't need a 6-pin power connector to make it run, which will help to reduce clutter in your PC.