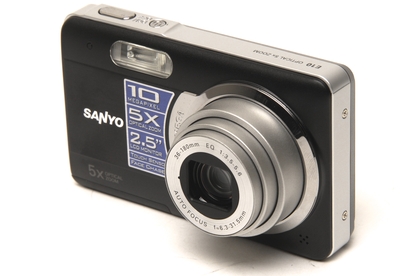 Sanyo's VPC-E10EX is a simple entry-level camera that takes crisp, vibrant images. It lacks advanced features but is well suited to photography novices.

Sanyo’s VPC-E10EX is a simple, fuss-free compact camera. It takes acceptable images, and the few extra features it possesses are easy to understand and operate.

While Sanyo’s most well-known products are its whitegoods, its projectors are highly regarded. With this track record of quality lens and optics products, the VPC-E10EX does not disappoint. It lacks the features of cameras from more established camera brands like Canon and Nikon, but its simplicity does not hinder its photographic abilities.

Sporting a black-and-silver paint-job with the odd hint of chrome, the VPC-E10EX shares its dimensions with the vast majority of entry-level compacts on the market. Measuring 94mm long, 56mm high and 25mm wide, the camera will happily slide into a pocket.

The camera's controls initially feel a little stiff — particularly the multi-function pad. The shutter button has a nifty touch sensor built in which begins autofocusing the instant your finger rests on it. While this might be annoying for novices, it slightly speeds up the entire process of taking photos.

This means, however, you will have to ignore the constant whirring of the autofocus motor. Both focusing and zooming are loud — thankfully both are quite fast, with the camera reaching full 5x zoom in just under a second. There is no optical image stabiliser built in, although a digital one is always active.

The VPC-E10EX has a 10-megapixel sensor that captures vibrant, consistently sharp images. ISO settings range from 50 to 2500. There is a reason that the automatic shooting mode only reaches a maximum of ISO 400, however: any images above this threshold show significant levels of grain, interpolation and detail loss.

In both macro and telephoto situations, sharpness levels are pleasing. Images do not display any of the softness we saw in Kodak’s EasyShare M1093 IS and are free of any barrel distortion. Chromatic aberration levels were acceptable — only small amounts of haloing and purple fringing were visible when closely examining high-contrast images.

Colour reproduction was impressive, with all colours well weighted and accurate; we found reds to be slightly under-saturated by default.

Speed performance was average across the board. Start up was average at 2.5 seconds, with the camera taking about as long to shut down. Shutter lag was a reasonable 0.08 seconds, but the pause in between sequential shots was a dismal 2.5 seconds. Thankfully, continuous shooting mode fixes this with shots captured every 0.8 seconds.

The VPC-E10EX has face detection and tracking, a series of scene modes and rudimentary video capabilities. If you are an enthusiast this might be a sticking point but we found the simplicity to be a boon — simply point and shoot. This is what Sanyo’s VPC-E10EX does best — it takes acceptable images with a minimum of fuss.