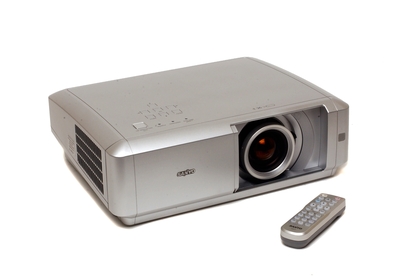 If you're in the market for a top-notch home theatre projector, you can't go wrong with the Sanyo PLV-Z5.

Back in 2005 we reviewed the Sanyo PLV-Z3 , an excellent LCD projector with very few flaws. In 2006, the PLV-Z4 didn't quite live up to the reputation of its predecessor. This year, in a sublime return to form, Sanyo's PLV-Z5 delivers everything we loved about the Z3 and more. With near-flawless performance across all its video modes and a wide array of customisation options, it's easily one of the best LCD projectors we have reviewed.

To test the projector's high definition performance when playing video games, we connected the Z5 to an Xbox 360 via one of its two Component video connectors. Running at 720p, we played Ghost Recon Advanced Warfighter 2 and Tony Hawk's Project 8. We used the HD-DVD movie Peter Jackson's King Kong to test the projector's high definition video output at 1080i.

The image quality was nothing less than stunning. We didn't notice any problems with the projector's sharpness, contrast or colour. Likewise, the projector didn't suffer from any pixel landing, flyscreen, image noise or uniformity problems. The motion video from our tests sources was fluid and ghosting wasn't noticeable. Black levels were rich and whites were pure. When displaying high definition content, this projector is impressive. You will be hard-pressed to find anything better on the market.

We were blown away by the Z5's ability to display a standard definition DVD. We ran two tests in standard definition. Using our Digital Video Essentials DVD, we viewed a series of test patterns in an attempt to uncover any failings that this projector may have. We couldn't find any. The greyscale patterns didn't suffer from image noise and the colour and SMPTE tests didn't exhibit any problems. Again, we couldn't help but notice the projector's excellent black levels we were impressed at how easily the unit powered through all of our tests.

For our second DVD test, we used the lobby scene from The Matrix. This is a particularly difficult movie for projectors to display due to the amount of green in the original source material. Some projectors can struggle to accurately reproduce the colours in the image. Due to its 12-bit processing, the Z5 didn't have any problems. We didn't notice any noise or over-sharpening problems. If you have an extensive DVD collection, you can be confident in the Z5's ability to deliver great results in standard definition, just as well as it does in high definition.

We connected the Z5 to a PC using a desktop resolution of 1024x768. This is the maximum supported resolution that is closest to the projector's native resolution of 1280x720. For the most part, the image looked excellent. Desktop icons were produced well and we didn't notice any pixelation. We ran DisplayMate Video Edition, which uses still test patterns to check for image abnormalities. We found very few problems. The greyscale and colour tests were completed flawlessly, and we didn't notice any uniformity or sharpness problems.

The design of the Z5 is identical to the Z4, with the only exception being that it has an extra HDMI port. The unit is silver/grey, has function buttons on the top, and connection ports at the rear. The unit has two HDMI connections, two Component connections, one Composite connection, one S-Video connection and a 15 pin D-Sub port for PC connection.

The left side of the unit has two scroll wheels, which are used for lens shifting. This is an extremely handy feature as it allows you move the projected image left, right, up and down to fit your screen perfectly without having to move the unit. Once you have it the way you want it, you can lock down the lens using the accompanying toggle switch. The lens sits at the front of the unit and has manual zoom and manual focus rings.

The Sanyo Z5 is also a very quiet unit and produces less heat than most projectors similar in size. It will still heat up a small room rather quickly, but it may take just that little bit longer before you start sweating.

Another feature that is impressive is the on-screen calibration. In addition to contrast, colour and brightness options, the Z5 has a wide range of tweaking options available. There are a multitude of pre-installed colour schemes, various forms of image scaling and it gives you the ability to tweak each of the primary image colours (red, green, blue). Using these tools, it's possible to calibrate the image to perfection, although some know-how (or a long period of trial-and-error) will be required.

If you're in the market for a top-notch home theatre projector with excellent colours, contrast and black levels, the Sanyo PLV-Z5 is one of the best units on the market. Its price tag is in line with the current crop of 720p projectors on the market and with its impressive 2-year warranty, it's exceptional value.