A fast, well-supported solid state drive that's a worthy upgrade for a laptop or desktop PC 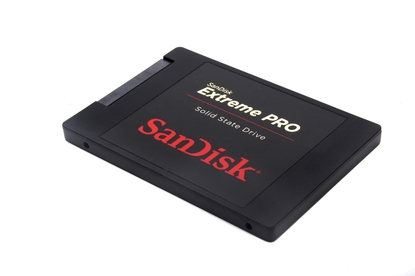 While the performance of the SanDisk Extreme Pro is very good overall, the killer feature is the 10-year warranty.

SanDisk has such supreme confidence in its products that it's offering a 10-year warranty on its latest solid state drive, the Extreme Pro SSD. It's the first time such a long warranty has been offered on a consumer drive, and it's sure to be one of the main features that will entice many people to buy it. The other features are fast performance and large capacity points.

A 120GB capacity isn't offered in this range of SSDs, with the family of Extreme Pro drives starting from 240GB, and going up to 960GB. There is a middle capacity, too, of 480GB, and this is the capacity that we're reviewing here — it has a usable formatted capacity of 447GB.

As its name might suggest, the Extreme Pro has been built with gamers, PC enthusiasts, and professional users in mind, and this is the reason the 120GB capacity has been dropped, as those types of users are likely to go for the bigger drives. That said, the 10-year warranty is also likely to make this drive appeal to all of you who are looking to upgrade an old laptop or PC hard drive with a brand new SSD.

The Extreme Pro SSD comes in a typical 2.5in form factor, and it can fit into any desktop PC, or any laptop that has a 2.5in drive bay with a thickness from 7mm or thicker. If it's to be installed in a desktop, it can be screwed into one side of a 3.5in drive cage, and if it's to be installed in a laptop with a drive bay thicker than 7mm, there is a little padding supplied to help it sit more snuggly. It weighs just under 60g and comes in a black enclosure with mounting holes on the bottom and at the sides. Its interface is 6Gbps SATA, and it has the same exact Marvell controller that was used in SanDisk's previous drive, the Extreme II.

We used one mainstream laptop and one mainstream desktop PC to test the drive, mainly to see how much of a boost it can give a computer with a hard drive from a regular user's perspective, and we compared it to a couple of other drives we currently have in our stable: Crucial's M550 and Toshiba's THNSNH256GBST.

For the laptop test, we used the Intel-based Dell Inspiron 15 5000 Series, which has a removable panel that facilities upgrades by the end user, and we made the SanDisk the system drive using Windows 8.1. For the desktop test, we used a low-cost AMD A8-based system and installed the SanDisk as a secondary drive to see how it performs on its own without having to handle operating system duties. CrystalDiskMark is the software that we used for recording the speed.

When tested in the Dell laptop, CrystalDiskMark's results for sequential read and write speed show that the Extreme Pro performs largely the same as the Extreme II, recording 511 megabytes per second (MBps) for reading and 480MBps for writing. It's 4K QD32 results, which are results for writing and reading 4K blocks of data in a random pattern (with 32 such requests in a queue to be performed), didn't show blistering speed in this scenario, with the write being 37.97MBps, and the read being 156.5MBps. Crucial's M550 and Toshiba's THNSNH256GBST both recorded better overall numbers in this scenario.

When we tested the SanDisk as a secondary drive in the desktop PC, the results were tipped the other way in SanDisk's favour. In particular, the random read and write rates, which are meant to be better than most drives on the Extreme Pro, came to fruition. We observed rates of 239.2MBps for reading and 233.1MBps for writing. The Crucial M550 got 192.1MBps for reading and 198.2MBps for writing, while the Toshiba was 0.1MBps faster in the 4K random read test, but slower at 191.7MBps in the write test.

The speed is relative, and it will depend on the computer setup that you use, as well as the tasks that you run. For all intents and purposes, the SanDisk Extreme Pro showed that it's a very quick drive, and this played out during our everyday usage. Load times for applications and the operating system were barely noticeable, and transfers from external hard drives were performed as fast as the external drive allowed. Basically any computer will benefit from the Extreme Pro being the system drive. On a desktop, you could use two of these drives in a RAID 0 array to bring even more speed to the fore.

A bit about the Extreme Pro's technology

Holding the data on the drive is MLC (multi-level cell) type NAND flash memory, and the cells are created using 19 nanometre technology. The firmware that runs the drive has a page-based algorithm, and SanDisk says that the way it runs the drive, along with a tiered caching system (which was also present in the Extreme II), allows the speed of the drive to be sustained at a high level for prolonged periods of usage.

Part of the tiered caching structure of the drive is nCache, which is a cache memory that's made using faster SLC (single-level cell) technology. Using nCache, the drive can basically organise small bits of data before writing them to the drive. The nCache accumulates the small bits of data at high speed and then writes them to the main NAND flash memory cells in larger blocks. This has effect of minimising the amount of time the drive has to perform garbage collection, which is the process of re-allocating data to cells by removing old data to fit new data.

Other things to note about the nCache are that it has lower latency than the drive's MLC chips, and it has been improved over the last implementation to provide better performance in mixed workloads. It's meant to make the drive faster when it comes to writing random bits of data, and to provide more steady performance across the board during real-world usage because of this. We saw this in the 4K QD32 test in CrystalDiskMark.

You can tell that it's a fast drive when you install it in a typical laptop and give it a run. When we swapped out the hard drive in the Dell Inspiron 15 5000 Series laptop with the the SanDisk Extreme Pro and installed Windows 8.1, it gave the laptop an entirely new feel. Apart from the lack of noise and a cooler chassis, the system was much faster, with menus appearing quicker, applications and Windows itself loading faster, and data transfers to external drives going at their maximum possible rate.

Not many new consumer laptops are easy to upgrade, but if you can unscrew the bottom panel off your laptop or easily access its hard drive in another way, the SanDisk Extreme Pro SSD is well worth picking up and sticking in there. If you've got a desktop, go ahead and stick one in there, too. And apart from the performance benefits, the 10-year warranty is hard to overlook.