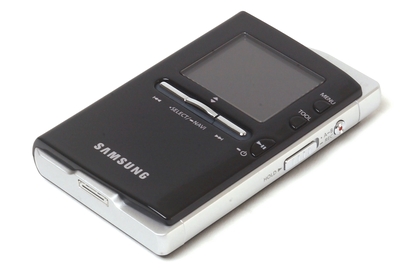 An MP3 player with advanced recording features,a small footprint and photo viewing, although this does come at a price.

Samsung's YH-J70 is a 20GB hard drive MP3 player with a few unique features that help distinguish it from the generic iPod copies we so often see. The YH-J70 includes line-in recording, a built in FM tuner, video/photo playback as well as 18 equalisation preset modes.

At 136g and measuring 62 x 99.8 x 16.4 mm, the YH-J70 is similar in size to the newly released 30GB iPod . The navigation menu can be accessed through the two-way joystick and auxiliary function buttons. It is quite easy to use and does do the job, although it doesn't have the same tactile response we have seen with the patented Synaptics control, present on the Ipod. Other design features include a separate record button, which allows on the spot recording with a couple of presses. The recording feature is definitely one of the stand out features of this device, and with a dedicated line-in port, users can easily record off any standard audio device, such as a CD player or Hi-Fi audio system.

Users who are interested in the recording feature for voice recording or from other music devices will find the YH-J70 very handy. Recording quality extends up to 192 Kbps, which is higher than the regular MP3 bit rate of 128 Kbps. We recorded from a variety of sources and found recording quality to be exceptional in all cases. FM recording was as clear as reception allowed, and in the case of this MP3 player, the reception was as good as we have seen in any portable tuner. Previous FM recording capable MP3 players, such as Sanyo's DMPM600B, have been disappointing in their recording feature due to the time needed to set up the recording feature. With the YH-J70, we were able to start recording immediately, at the press of the recording button. This is a feature worth looking for, as we would hate to miss the beginning of a track when recording off the radio. The voice recording feature also worked well with the internal microphone, with which we were able to record a sound source up to 5 metres away, without any problem hearing the recording. The highlight recording feature available on this device is the line-in recording function. Using the dedicated line-in port, we were able to record tracks directly from a CD player. There is an auto-sync feature, which helps in distinguishing separate tracks, although if there is a break in the middle of a track, this will be recorded as a new MP3 file. This is not so much of a problem, as files are stored and played back sequentially.

We used the included software package, Multimedia Studio, to transfer our music collection to the device. Being a USB2 device, we were able to transfer large amounts of files in no time. The included software is a multimedia management application, similar to iTunes, and allows users to create and organise play lists, convert videos to the supported SVI video format, convert/edit and copy photos to the device and rip tracks off audio CD. Users who wish to use their own playback and management software will be happy to hear that the YH-J70 also functions as a removable hard disk. This means that you can copy music, video and any other type of file on to the device with out using the Multimedia Studio software. One downside to not using the included software is that the file organisation will be limited to folder names and track names if you copy music directly through a file explorer utility.

Sound quality was excellent and the provided earphones were, surprisingly, very responsive and appear to be acceptable for general listening. We were surprised at this because of the common tendency of manufacturers to include sub-standard earphones with MP3 players, which often cripples the apparent quality of the device. It seems in this case that Samsung have caught on, and we were happy to use their buds. When playing back music, users are able to select between 18 preset equalisations as well as create their own equalisation setting. This is the largest amount of sound configurability we have seen from an MP3 player, and we anticipate that many users will enjoy this functionality.

The secondary features of the device include being able to play back video, play games, view photos and transfer files directly between digital cameras, or other USB devices. The video playback was not very impressive, because of the limited screen size, and video also had to be converted to the SVI format, using Multimedia Studio. Viewing photos also suffered due to the small screen size, although it still is a feature to we enjoyed having at hand. By far, the most important of the secondary features is the Host USB function. Using the provided cable, we were able to transfer photos and MP3's of other supported USB devices. This will only work for devices which appear as a removable drive, which is most USB devices, although there do exist a few cameras which can only work with proprietary software/drivers.

Considering the price, Samsung's YH-J70 is not a cheap MP3 player, especially when looking at the iPod 30 Gb, which is cheaper and provides more storage space. But this MP3 player does have the functionality of recording through line-in and off FM, which does help in justifying the price difference.