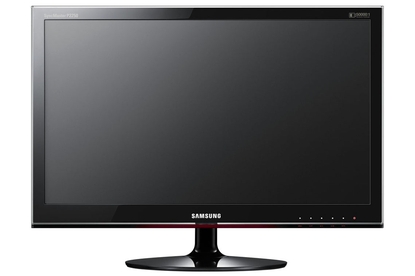 The Samsung SyncMaster P2250 LCD monitor looks great and performs reasonably well, though it’s a little pricey when factoring in the lack of an HDMI input.

Samsung has brought the style of its previous LCD television range to its latest LCD monitors. Though lacking the LED backlighting technology seen in many of the latest televisions and bereft of an HDMI port, the 21.5in SyncMaster P2250 LCD monitor provides good all-round image quality.

Part of the "Lavender" series of monitors, the SyncMaster P2250 LCD monitor uses Samsung's "Crystal Design" — an ultra-slim bezel with a piano black finish and a hint of red on its edges. The glossy finish attracts fingerprints and reflects the fluorescent lighting of a standard office environment, but it's certainly an attractive and stylish look.

There is a touch-sensitive control panel on the bottom right of the SyncMaster P2250's bezel. The six buttons display glowing red text when pressed and this means they can be seen in the dark. They aren't as responsive as we'd have liked — they often take more than one press to activate and this can become frustrating. The glossy round stand of the SyncMaster P2250 LCD monitor matches the design but provides limited adjustability. It can be tilted but doesn’t swivel or rotate.

The biggest disappointment with the Samsung SyncMaster P2250 LCD monitor is its lack of an HDMI input. This means it won't appeal to users who may want to hook it up to the latest high-definition gaming consoles. It has single D-Sub and DVI ports and Samsung only includes a VGA cable in the sales package.

With a Full HD resolution of 1920x1080, a 16:9 aspect ratio and a 2ms response time, the lack of HDMI is a real shame, because otherwise the P2250 is a solid performer. Using DisplayMate, we put the SyncMaster P2250 through its paces and were generally impressed, though it's far from perfect. Contrast and colour are excellent but the monitor struggles with distinguishing blacks at the top end of the scale.

General office tasks are pleasing: text is sharp and clear with no visible aberrations, though the light reflecting off the glossy bezel did tire our eyes after long periods of use. Detail and general sharpness are also impressive and we encountered no issues of ghosting when watching movies and playing games.