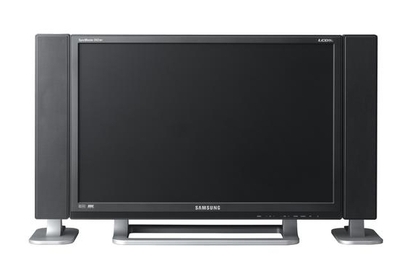 A television tuner doesn't turn this otherwise gorgeous monitor into a good TV.

Samsung touts the SyncMaster 242mp's included TV tuner as the model's major draw. But this 24" wide-screen LCD monitor deserves a closer look instead for its stellar still-image quality.

I tested a shipping version of this monitor and found that for office tasks, its bright screen ranks among the best large wide-screen LCDs I've seen; the unit deftly showed sharp text, dramatic contrast and rich colours.

Unfortunately, like other LCD monitors, the 242mp is not as adept at switching gears between work and play. Whenever I played a DVD--either via the DVI signal from a PC or through a component signal from a high-quality DVD player--I had to fuss with multiple controls to reduce the picture's graininess, including changing the colour settings and switching to a movie mode using the small but functional remote control.

Alas, even after my adjustments, ghosting, image artefacts, and a dark picture still plagued this screen during both DVD and TV playback. Its 16-millisecond black-to-white response time couldn't keep up with the swordplay action in The Lord of the Rings: The Return of the King, either.

Offering S-Video, composite, and component inputs as well as DVI and analog PC inputs, the 242mp hooks up to many external devices and PCs. Its TV tuner connects easily to your cable via an included adapter. Its speakers pack a decent punch.

For considerably less, you could buy the similar-size Dell UltraSharp 2405FPW (which lacks speakers and a TV tuner). You could then add speakers and a TV-tuner card to your PC and even get TiVo-like functions--all for less than you'd pay for the 242mp. You'll have to decide whether the Samsung's all-in-one convenience is worth the cash.