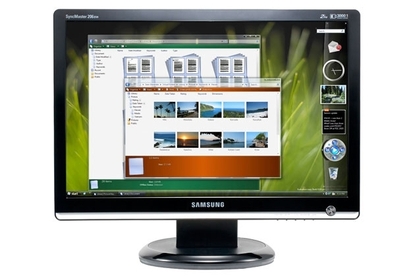 The Samsung SyncMaster 206BW is a very good widescreen desktop display. It is competitively priced and, once calibrated, performed very well in our text and colour tests. But, of course, you get what you pay for. If you can live with a limited viewing angle and a relatively inflexible design, and without a lot of extra features, the Samsung SyncMaster 206BW could be a fine choice if you're looking for a medium-sized display on a small budget.

The Samsung SyncMaster 206BW is an affordable, widescreen, 20in LCD monitor.

And although it's a pretty barebones model in terms of extra features, the Samsung SyncMaster 206BW is anything but skimpy when it comes to its specifications, boasting a super-fast 2ms response time.

The Samsung SyncMaster 206BW sports a shiny black case with silver accents and rounded edges. The buttons used to navigate through the on-screen menus are located on the bottom of the display, and each button's function is clearly marked just above it, making them easy to use.

The base is relatively stationary, with no height adjustment or pivot capability; the Samsung SyncMaster 206BW will tilt back a few degrees and can swivel from left to right easily.

There are two inputs -- one analogue port and one DVI digital port -- for connecting up two computers to the display. When we plugged the Samsung SyncMaster 206BW into two computers, it booted correctly into its native 1680x1050-pixel resolution.

The Samsung SyncMaster 206BW was overly bright and blue when first connected; most displays are right out of the box. After calibrating the monitor with an Eye-One Display 2 device, greys were more neutral and light areas were no longer overblown.

If you don't have an external calibrator, take heart: we were able to get the Samsung SyncMaster 206BW looking just about as good using the on-screen menus. Text was clean and clear and very legible, even at small point sizes. Our colour test images looked great.

The Samsung SyncMaster 206BW's viewing angle was not one of its standout features. As with many of the 20in widescreen monitors we've recently tested, colour shifts and loss of contrast were very noticeable when looking at the display from left or right of centre. The up-and-down viewing angle wasn't great, either.

If you don't use your display to collaborate with co-workers very often, then the Samsung SyncMaster 206BW's limited viewing angle is not really a big deal. But if you do have folks looking over your shoulder or seated next to you on a regular basis, then chances are that they won't be experiencing the same colours that you are seeing on this monitor.