Samsung's Series 9 (UA55C9000) 3D LED television is a very expensive proposition, with no change left over from $10,000. It is very stylish and well built, it has good picture quality and packs plenty of included features. It's not perfect -- the touchscreen remote control is a disappointment, and it doesn't have the best picture quality we've seen from an LED TV -- and the price tag is several thousand dollars too high, but overall it's an impressive product.

The Samsung Series 9 (UA55C9000) is a 55in 3D LED television that is a mere 7.8mm thick across its entire panel, with a stunning side profile and excellent construction.

Its picture quality is good and it has a huge range of integrated features that we haven’t seen on any other television before. However, these unique features come at a very substantial price and there are aspects we’re not in love with, like the fiddly touchscreen remote control.

Samsung has clearly put a lot of effort into the design and construction of the Series 9 (UA55C9000), and the end result is one of the best-looking televisions to grace our Test Centre. It is incredibly thin even for an edge-lit LED television, at 7.8mm deep across the panel.

The television’s bezel and base are constructed of polished brushed stainless steel and the entire panel is very well constructed. 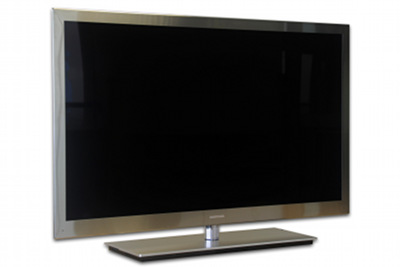 When moving the television on its swivel stand, it does not wobble or flex — given how thin the TV is, this is an impressive achievement.

To cut down on the thickness of the edge-lit LED TV panel, all the electronic trickery of the Samsung Series 9 (UA55C9000) — the digital tuner, speakers, HDMI inputs, etc. — is hidden in the television’s base. This means the stand can’t be completely removed; when you’re mounting the Series 9 (UA55C9000) on a wall, the stand attaches to the television’s rear and increases overall thickness to around 30mm. 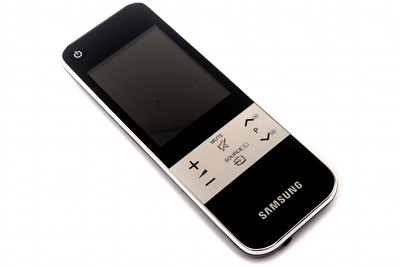 Another inclusion that speaks to the luxurious pretensions of the Samsung Series 9 (UA55C9000) is the included remote control. It’s a similar shape and size to Samsung’s regular LCD and plasma television remote controls, but instead of tactile buttons it uses a 3in colour touchscreen display — think of a high-end universal remote like the Logitech Harmony 1100i, except slimmer, sleeker and even more packed with features.

We both love and hate the Series 9 (UA55C9000)’s remote control. It looks great and it has some fantastic features — including using the 3in display as a secondary monitor while you’re away from the big screen, which is a definite crowd pleaser — but it’s simply not as easy or intuitive to use as a remote with real buttons. We got lost in the depth of menus when trying to navigate to functions like 3D playback and Internet@TV (Samsung’s video-on-demand service), and the lack of QWERTY keyboard support for entering a Wi-Fi password is astounding. The remote control also blazes through its battery life, running out of juice within a couple of days in our testing — it then requires charging via a connection to the television’s base. It is very pretty though, and if you’re content to spend some time learning its ins and outs it may prove to be a perfectly usable device. 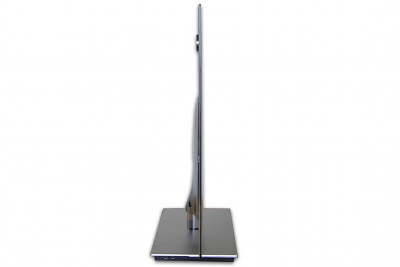 The features list of the Samsung Series 9 is one of the lengthiest we’ve seen on a consumer LCD or plasma television. A 200Hz panel with edge LED lighting, 3D playback with 2D-to-3D conversion, twin HDTV tuners, a diverse video-on-demand and applications service, DLNA network content sharing, digital television recording and playback via a USB hard drive, JPEG photo and AVI movie support. There are few features we can think of that the Samsung Series 9 (UA55C9000) doesn’t have. If you’re looking for a future-proof television, the Series 9 (UA55C9000) is our new benchmark for included features. 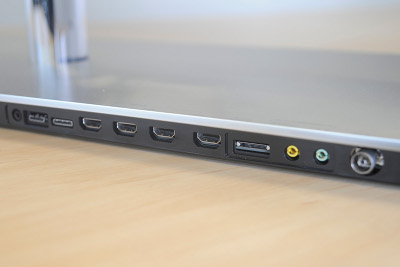 As Samsung’s most expensive and most technologically advanced television, the Series 9 (UA55C9000) has a comprehensive suite of connectivity options. Buyers will be pleased to find the usual four HDMI ports on the television’s base, as well as break-out ports for composite and component video, Ethernet and DVI. We were surprised to find that wireless is not integrated into the television, but is instead enabled when plugging in an included USB dongle — taking up a USB port that could have been occupied by a USB hard drive or flash drive. Bafflingly, the television doesn’t support Samsung’s Skype camera.