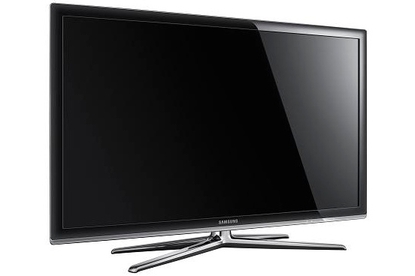 Samsung's D7000 Series 7 LED TV is one of the top 3D TVs announced at CES 2011. The differences between this and the top Series 8 seem to be mainly cosmetic; we're looking forward to conducting some thorough testing when we get a review unit.

The latest Samsung Series 7 LED TV, announced at the CES 2011 show, has almost all the bells and whistles of the Samsung Series 8 LED TV: 3D processing, 200Hz and a very thin bezel combine to create an impressive television.

The Samsung Series 7 LED TV doesn't have the Series 8's inbuilt Wi-Fi or touchscreen remote control, which means it should be significantly cheaper. If picture quality is your main concern, this is a good thing. The Series 7 is just as thin and attractive as the Series 8, with a chrome bezel that's barely thicker than 5mm.

The design of the Samsung Series 7 differs from its more expensive sibling with a touch of red around the crystal bezel surround. The same four-legged stand that we saw on the original Samsung Series 7 LED TV from 2010 is back, and it still looks excellent.

We're yet to get a review unit in our Test Centre, but we're looking forward to some hands on time with the 2011 Samsung Series 7 TV.