An introduction to photography. 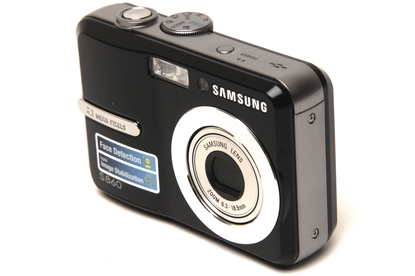 Samsung’s entry-level S860 has plenty to help new camera users, but its images don't help it stand out from the crowd.

Samsung’s S860 is an entry-level camera for novices. It has an inbuilt Photo Help Guide and a comprehensive Function Description feature. While it doesn’t take the most thrilling pictures, it’ll be a great introduction into the world of photography.

The S860 has an 8.1-megapixel sensor and a 3x optical zoom lens. A 2.4in LCD is mounted in the rear, along with a number of buttons. The camera’s top mirrors the S1070: a dial to switch between camera modes as well as power and shutter buttons. It’s powered by AA batteries like most other entry-level cameras, in order to keep costs down and battery replacement simple. If you’re using the flash often it will chew through batteries, so you may want to invest in a rechargeable set.

The 3x zoom is versatile enough, with a 38-114mm focal length (35mm equivalent). It won't be great for indoor group photos or larger outdoor landscapes, but for the budding photographer it should be good enough.

The S860 has a sturdy body, but it does feel quite cheap and hollow. It is also a fingerprint magnet, so you’ll need to carry a cloth with you if you want to examine detail in photos on its screen. The button layout is much the same as on the S1070, including the rear-mounted zoom control.

Put simply, the S860 does everything that other base-model point-and-shoot cameras can. Its Help Guide mode does a good job of explaining the camera’s basic functions and the necessary steps in composing a photograph. The Function Description mode is also useful when setting custom modes, though it makes the interface slightly clunky and might annoy advanced users.

From a cold start-up the camera will be ready to take a photograph in around 1.5 seconds, though you’ll need to wait up to an additional five seconds if you’re in low-light conditions and require flash.

Its shutter lag is quite significant, but this is to be expected from such a budget model. From fully depressing the button to an image being captured takes just on 0.2 seconds, so you’ll be struggling with fast-motion photography. Average shot-to-shot is an equally dismal 2.4 seconds, with continuous shooting mode reducing this figure to 1.8 seconds between frames.

A small range of features are built in, ranging from digital image stabilisation to on-camera photo tweaking. Thankfully, they’re all easy to use and don’t complicate the interface too much.

As expected, the images were somewhat uninspiring. Sharpness wasn’t particularly high nor was it consistent from edge to edge. For the comparatively small image size it was acceptable, however. Noise was also high from ISO 400 upwards, but on lower levels images were generally clean of interpolation and graininess. Colour wasn’t spot-on either, with a slight bias towards blues. If this annoys you too much there’s a manual colour mode that can be set for either post-processing or before taking the photo.

If you’re looking for an easy-to-use camera that will teach you a little about photography without breaking the budget, the S860 is a valid choice.