Samsung's R580 is a great desktop replacement notebook. It's fast, looks good, is well built and has a good array of ports. You can use it to perform mundane office tasks or taxing file encoding tasks alike. We wish it wasn't such a glossy machine though, as it tends to collect fingerprints. It could use a backlit keyboard, which would help those of us who like to type in the dark.

It may look big and bulky, but Samsung's 16in R580 laptop is surprisingly light. It weighs only 2.5kg and it feels very well built; it also looks stunning with its gradated, burgundy body. While it's best suited as a desktop replacement notebook, you'll still be able to take it with you to the office or the classroom — provided you have a bag that's big enough to accommodate it.

Inside the chassis is an Intel Core i5-520M CPU, which runs as 2.4GHz. The CPU has two cores as well as Hyper-Threading, so it's perfect for multitasking and for high-end tasks such as video editing and encoding. It also has Intel's Turbo Boost function, which can make the CPU go faster when a demanding task is running, and slower when the machine is idle. In the Blender 3D rendering test the CPU ran at up to 2.662GHz when using four threads. When rendering using only one thread (therefore employ just one of the CPU's cores), its speed peaked at 2.793GHz. Using four threads, the R580 recorded a time of 55ec to complete the workload, which is a time that has (so far) only been beaten by ASUS G60J Republic of Gamers notebook (which runs an Intel Core i7 CPU and can process up to eight threads simultaneously).

Check out our review of the Samsung R590-JS02AU notebook.

Along with the fast CPU, the Samsung R580 notebook has 4GB of RAM, a 500GB hard drive and NVIDIA GeForce GT 330M graphics. This grouping of components amassed a score of 102 in our WorldBench 6 benchmark, which is a zippy figure and only five shy of what the ASUS G60J achieved in the same benchmark suite. The GeForce GT 330M graphics adapter gives the Samsung R580 the ability to run plenty of games — even newer titles — although you might have to forego some of the eye-candy they offer in order to get very smooth frame rates. The R580 scored 7412 in 3DMark06, which is a solid, middle-of-the-road result.

As far as everyday performance is concerned, the Core i5-520M CPU really gives this Samsung notebook a lot of grunt, and this is great for productivity. We could easily rip a DVD (and the DVD drive was practically silent while doing so!) while encoding an already-ripped DVD to the Xvid format, while browsing the Web, while writing this review; the CPU never maxed out during these tasks. (It took just on 55min to compress a 3.88GB VOB file to a 1.36GB Xvid file.) The hard drive got a very good workout during these tasks; it's a 5400rpm drive and although its file transfer rate of 26.83 megabytes per second isn't a fast one, it was still able to churn through heavy workloads in a zippy manner.

We love the feel of the Samsung R580; not necessarily it's finish — which we think is too glossy, slippery, and will get marred by fingerprints — but its build quality. The keyboard feels rock solid, the palm rest is big and comfortable and the chassis doesn't bend when you pick up the laptop from either end. The lid feels strong, too, and its hinges hold the screen stiffly in place. 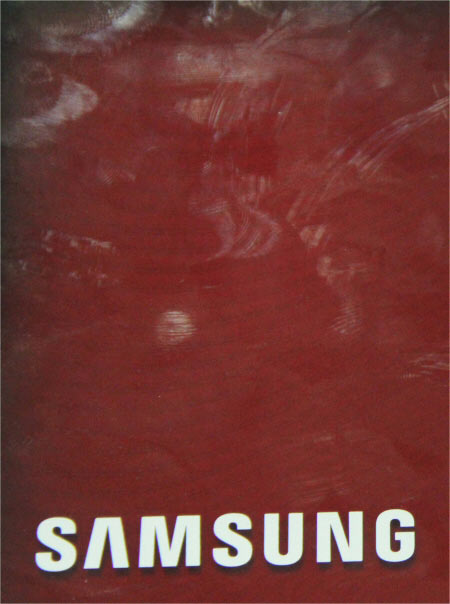 You don't have to look closely to see the blotchy marks on the lid. These are just fingerprints from everyday use.

When the CPU and hard drive have been working hard for a couple of hours, the base will get noticeably warm, and some heat will also be felt through the palm rest. If you don't use the R580 on your lap then the heat on the base won't an issue, but the heat through the glossy palm rest can lead to slightly slippery palms if you type for long periods. When you use the R580 on your lap, you have to be mindful of one of the air intake vents for the CPU cooler, as it sits underneath the laptop and it tapers upward; it can easily be blocked when the laptop is rested on a soft surface. A vent higher up on the side of the laptop would have been better. The SD card reader is also in an awkward position on the front of the unit, as it sits too low and isn't spring-loaded. The latter makes removing SD cards difficult.

The screen has rich colours and will display photos nicely. It's bright enough to use while sitting near a window on a bright day, but because it is glossy, reflections will be annoying — especially while looking at photos. As is the case with most laptop screens on the market, the vertical viewing angles are narrow. You'll have to adjust the screen frequently if you're the type of person who shifts around in their seat regularly.

One thing about the screen that's a bit of a let-down is its resolution. Despite being a big, 16in screen, its resolution is only 1366x768. It's okay for multitasking and using Windows 7's Aero Snap feature to line up programs side by side, but if you have two browser windows open then most Web pages will require you to scroll horizontally (unless you make their text smaller).

The R580's touchpad is very responsive. In fact, it's a little too responsive and sometimes it will think you want to horizontally scroll when all you want to do is move the pointer. This is because the scrolling area is located a few millimetres in from the touchpad's edges, rather than right on the edge. It's just a matter of getting used to it and knowing where not to place your finger.

Samsung has introduced touchpad lights on this notebook. In the same way a runway lights up for a pilot at night, there is a light on each corner of the touchpad so that you can see where its boundaries are when you use it at night. The texture of the touchpad feels dull compared to the glossy finish of the palm rest, so these lights really aren't necessary. They switch off if you don't use the touchpad after a short period of time, and only light up when you start using the touchpad again. (They can be disabled in the BIOS.) 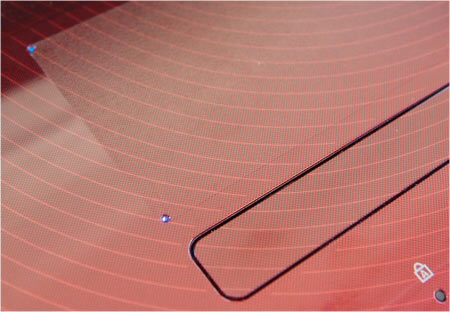 The lights on the corners of the touchpad are nice, but not overly useful.

The Samsung R580 ships with a 6-cell battery that lasted 1hr 35min in our rundown test. In these test we loop an Xvid video while the screen brightness is maximised, power saving is switched off and the wireless radio is enabled. Considering the 16in screen, it's not a bad result. We managed to get 2hr out of it by using Samsung's custom power saving profile. There is a physical indicator on the battery that lets you know how much charge is left; you are unlikely to want to use this notebook while on the road or away from an outlet, so it's probably not something you'll be checking regularly.

The battery utility that Samsung has installed can be used to limit the battery's charge to 80 per cent, which is said to prolong the overall life of the battery (the amount of charging cycles it can go through), especially if the unit will be plugged in to an outlet most of the time and constantly on charge. 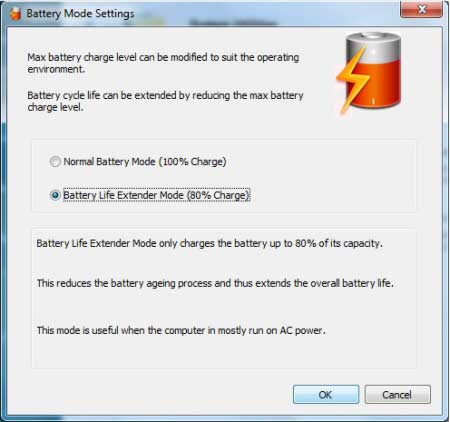 The Battery Life Extender mode can be selected either in the BIOS or using the Windows 7-based utility.

Samsung has also installed backup software (Recover Solution 4) and CyberLink DVD Suite disc creation software. When you first start the notebook, you are prompted to partition the hard drive. If you choose to do this, then you can use Recovery Solution 4 to store a backup of your system drive on your D drive.

Another utility you'll notice is Samsung's ChargeableUSB port. When enabled, the notebook will be able to charge USB devices even when it is switched off and unplugged. Only the USB port on the left side of the notebook works for charging. There are two other USB ports on the machine, as well as an eSATA port that doubles as a USB 2.0 port. 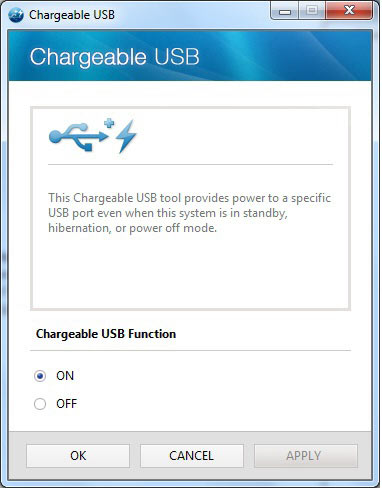 With its abundant speed and good build quality, we are happy to recommend the Samsung R580 if you're after a desktop replacement notebook. It has four USB 2.0 ports (one is also an eSATA port), an ExpressCard/34 slot, 802.11n Wi-Fi, Gigabit Ethernet, HDMI, a VGA port, a webcam and a DVD burner; these are standard facilities for a modern laptop. We just wish the screen had a higher resolution and that the keyboard was backlit.