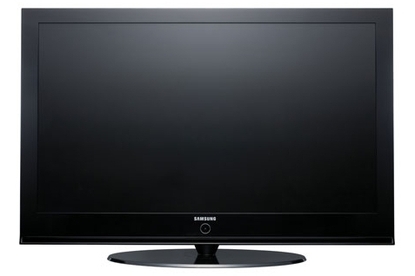 If you are in the market for a mid-range Plasma television with good all round performance, the Q9 series from Samsung is definitely worth a look.

The Samsung PS42Q91HD is a Plasma television with a native resolution of 1366 x768. Our testing revealed excellent image quality in standard definition and a handful of issues in HD. The successor to the Q7 series Plasma, this isn't quite as good, but its still a great buy nonetheless.

To test the high definition capabilities of the unit we connected the Xbox 360 via a Component connection to perform gaming and HD movie tests. The gaming tests were conducted at 720p resolution using the games Tony Hawk's Project 8 and

The gaming tests showed a minor level of pixelation on curved surfaces, but this isn't severe enough to affect game play and isn't noticeable from a comfortable viewing distance. Colours and black levels are excellent with no over saturation or discolouration. At default settings there is severe over-sharpening but this can be largely corrected by turning the sharpness settings down. However, turning it down too much makes edges look a little too hazy, so a small measure of over sharpening has to be endured. We found no image noise at all and no contrast stepping but there is a moderate level of motion jitter which does, at times, become distracting.

The HD-DVD test followed similar lines with respect to over-sharpening and motion jitter but the pixelation issue was largely absent. The colour reproduction and black levels are superb and the detail in finer elements such as hair is excellent, even in darker areas of the image. There is no contrast stepping in these areas either, which is quite good considering many televisions we've reviewed exhibit this problem.

For those entering the world of high definition content, the Q9 plasma will suit their needs. It doesn't have the superior image quality of some units we have reviewed but it still looks excellent and has only a handful of minor issues.

Standard definition is tested using two DVDs. We do "real-world" tests by viewing the lobby scene from The Matrix and technical testing using the Digital Video Essentials (DVE)DVD.

Like the Q7 Plasma, this unit performs exceptionally in standard definition. The colour reproduction is accurate with deep, black levels. Skin tones are reproduced well and there is no contrast stepping. However, there is a noticeable level of over-sharpening, even after calibration, as well as a minor level of pixilation. The motion issue we encountered in the high definition testing is still present which, at times, makes the movie look a little unrealistic.

The technical testing revealed noise and a slight magenta discolouration in low gray during our greyscale test but the blend along the scale was handled beautifully without any stepping. The rest of our DVE tests were handled without any problems at all.

For standard definition content, this unit will please most users. The level of interpolation artefacts is very low while watching movies, far less than many televisions we have reviewed in the past. AV enthusiasts may find the motion issue a little unsettling but from a comfortable viewing distance in your lounge room, it shouldn't be a massive problem.

We connected a PC to the unit via the VGA D-sub connection at the highest supported desktop resolution of 1024x768. Using our DisplayMate Video Edition software we ran extensive tests on the unit. Plasma televisions are notorious for being poor when connected to a PC source, but the PS42Q91HD handles it well. The desktop icons are clear without any discolouration or pixelation and text is easy to read. Our tests showed some streaking in the streak tests but it was specific to black bars on a dark grey background. This shouldn't affect the overall PC performance, especially when it passed the rest of the tests without a problem. We were most impressed with the resolution tests. The native resolution is higher than 1024x768 and in cases such as these we have grown accustomed to seeing banding in the horizontal resolution test. In the case of the Q9, the test was rendered perfectly, with no problems at all. This is a rare thing, in our experience, and one that we were mightily impressed by.

The design of the Q9 is in keeping with the current Samsung television range. The entire chassis and stand is gloss piano black which looks very attractive and stylish. The rear panel has a wide range of connection options including two HDMI, two component, one composite and a D-Sub port for PC connection. In addition there is a digital audio out port for those using HDMI and a home theatre sound system. There is also a side panel which has a third HDMI port and additional Composite and S-Video connections

Considering they are integrated speakers, we found the sound on the Q9 to be excellent with only a little muting in the some of the bass tones. The audio separation is handled well without losing any instruments into the background as the volume was ramped up, and at high volumes, there is very little distortion.

The TV tuner has fairly standard image quality for this country. It's not brilliant, but it's not mediocre either. Both HD and SD digital channels exhibit noticeable pixelation and detail loss but this is common with most televisions and not something that we can hold against the Q9. We were most impressed with the how well the tuner picked up stations when we ran the automated set up. On average, most tuners we test using our office aerial tend to pick up 46 channels but the PS42Q91HD found 52.

If you are in the market for a mid-range Plasma television with good all round performance, the Q9 series from Samsung is worth a look. The price tag is affordable for the sizes available and for many users, the problems we have discussed in this review will be considered fairly minor.