Samsung's Series 5 Ultrabook is thin and light, yet it includes a DVD burner and switchable graphics If you want an Ultrabook that has a lot of features -- including a built-in DVD burner -- then Samsung's Series 5 is for you. It also includes a dual-band Wi-Fi adapter, two USB 3.0 ports and HDMI. It's a comfortable notebook to use, but it doesn't have a backlit keyboard and its screen isn't of high quality. Nevertheless, it's a good product overall.

The Samsung Notebook Series 5 ULTRA (530U4B-S01AU) is the first one I've seen to house a built-in DVD burner as well as a discrete graphics adapter. It manages to squeeze these components into a chassis that meets Intel's restrictions for what an Ultrabook should be. It's the type of notebook that doesn't have much of a "wow" factor to it, but that's just because it has a grey, matte finish, rather than glossy cladding. When you look beyond the surface, it's a very useful and mobile notebook that's comfortable to use and easy to carry on an everyday basis. However, it does have a few drawbacks.

Some curves along the edges, rounded corners and a hinged Gigabit Ethernet port are reminiscent of the marvellous Series 9 ultraportable laptop that I reviewed last year, but it's not as svelte. You could say that the Series 5 is built for users who frequent pubs rather than swanky bars. There aren't any shiny bits on its body and its 14in screen has a matte finish that won't reflect lights.

With a weight of 1.8kg and a thickness of 24mm (if you count its rubber feet), the Samsung Series 5 is slightly bigger than the other mainstream 14in Ultrabook I've seen, Toshiba's Satellite U840. Samsung has done well to contain the size of the laptop considering the inclusion of a tray-loading DVD burner on the right side of the unit; it doesn't feel overly heavy or bulky to carry. Furthermore, the sturdiness of the laptop hasn't been compromised; the side with the DVD burner feels almost as solid as it would without a drive.

It's a laptop that's primarily made of hard plastic and while it feels solid overall, some issues were noticeable on my test unit. In particular, the front-right side of the chassis made an annoying clicking noise whenever I picked it up from that side, indicating something was either putting pressure in the wrong place or not fastened properly. The lid that houses the screen felt strong, but when I applied slight pressure to it from both sides, a vertical line appeared on the right side of the panel, which was disconcerting. The hinges holding that screen are stiff when closed, meaning I couldn't open the laptop with one hand when the laptop was sitting flat on a desk; while they hold the screen at a desired angle, even slight bumps can cause the screen to vibrate back and forth — a lot more than other laptop's I've tested.

The screen itself isn't great either. It has a native resolution of 1366x768 and decent brightness. However, its vertical viewing angles are very narrow; I had to adjust the screen a lot, even while just browsing the Web, as colour details were often lost. For example, when doing a Google search, the results that appear shaded at the top of the page to indicate advertisements just looked like they were part of the organic results unless I had the screen positioned at the perfect angle. This is similar to what I saw in the Series 7 Chronos laptop and it's a shame because Samsung has such a fine pedigree when it comes to computer monitors.

The Series 5 features a surprisingly good set of input devices. The keyboard has isolated keys that possess decent travel and responsiveness. It's not backlit though, which I found to be a drawback. The palm rest is 85mm deep and doesn't get warm, even after prolonged typing sessions. I like the ELAN touchpad, which is 102x55mm and which was responsive in my tests. It had no problems with two-finger scrolling and three-finger flick gestures either. The left- and right-click buttons are separate to the pad, instead of being located underneath it. They make a conspicuous clicking sound when pressed.

After using the Series 5 on my lap for a while for basic Web browsing and word processing, the base got warm, but not so warm as to become uncomfortable. The air vent for the laptop is located on the spine and a small fan pushes air through it and up towards the screen through the gap between the hinges and the chassis. There are vent holes on the chassis to provide the fan with fresh air, and if the laptop is placed on a soft surface for a while, the base will get warmer than usual. Noise from the fan isn't really an issue; only a slight whirr can be heard when the laptop is being used for basic, non-processor-intensive tasks.

Two speakers are located above the keyboard, but they produce shallow-sounding audio that's only good for watching the occasional YouTube video. I had to plug in headphones to get any enjoyment out of music and movies.

On the inside, the Series 5 Ultrabook contains an Intel Core i5-2467M CPU, which has a 1.6GHz speed, two cores and Hyper-Threading. It's surrounded by 4GB of RAM (the laptop supports up to 8GB via a free slot), hybrid storage and switchable graphics. As far as configurations for Ultrabooks are concerned, it's not exactly typical of what I have seen so far. It has the ability to use either the integrated Intel HD 3000 graphics, or the discrete AMD Radeon HD 7550M adapter that's installed. 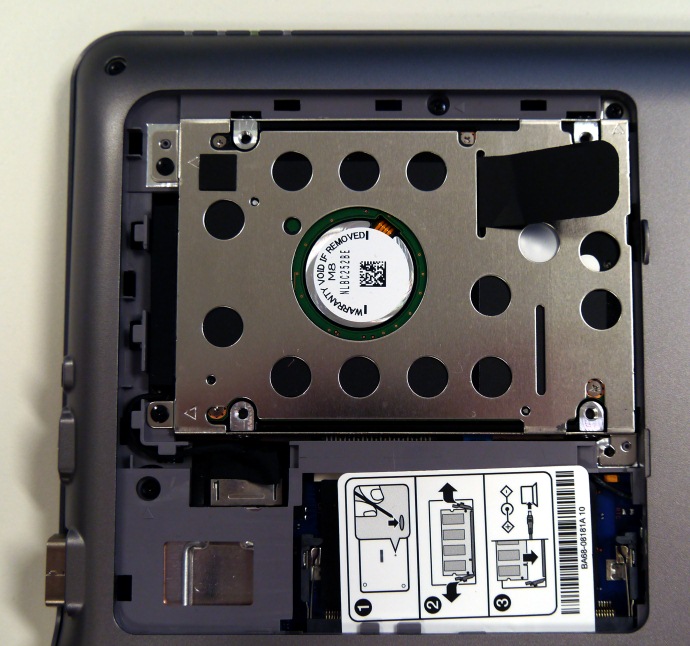 The access panel on bottom of the laptop allows for the hard drive to be replaced and more RAM to be added.

In Blender 3D, the CPU completed a test rendering task in 60sec, which is the same result as the Toshiba Satellite U840, which runs the same CPU. In iTunes, my MP3 encoding test finished in 1min 10sec, while my AutoGordianKnot DVD-to-Xvid conversion took 1hr 11min. These results are what I expected. In 3DMark, the AMD Radeon adapter recorded 5391, which is about 50 per cent more than what the Intel HD 3000 adapter recorded in the same test (3473). That said, it doesn't mean that this Ultrabook can be used for 3D gaming.

For storage, Samsung includes a high capacity drive (a 500GB Seagate ST500LM012 HN-M500MBB), but it only has a 5400rpm spin speed. When duplicating data on the drive, it recorded a rate of 32.61 megabytes per second (MBps). In CrystalDiskMark, it recorded a read rate of 88.1MBps and a write rate of 87.93MBps. The duplication test is slower than what the Toshiba U840 recorded in the same test with its 5400rpm drive (55.78MBps), but it was faster than the Toshiba in the CrystalDiskMark tests by more then 10MBps.

To boost the system's overall responsiveness and recovery from hibernation, Samsung has also installed a 16GB solid state drive. This doesn't show up as a drive in Windows, and it basically works automatically in the background. The system did feel responsive during my tests when launching programs and multitasking. It took about 3sec to emerge from sleep mode, 8sec from deep sleep, and a cold boot took 42sec (faster than the Toshiba U840's time of 56sec). Incidentally, the power button on this notebook is one of the worst I have ever seen. It's sunken into the chassis and it's not a full button, making it very awkward to press. It's also worth noting that Norton Anti-virus and other programs are pre-installed and there is potential for annoyance via pop-ups.

The battery is sealed in the chassis of the Ultrabook and can't be easily replaced. It has a rating of 45.3 Watt-hours and eight cells, but it didn't give the notebook as much life during our tests as we'd hoped. Where the Toshiba U840 Ultrabook lasted 4hr 4min in our rundown test (in which we disable power management, enable Wi-Fi, maximise screen brightness and loop an Xvid-encoded video), the Samsung's battery only lasted 3hr 29min. It was an expectedly shorter life when using the AMD graphics adapter, lasting only 2hr 48min.

Despite a few issues with its build quality, screen and relatively short battery life, the Samsung Series 5 Ultrabook is worth considering for its performance, good keyboard and touchpad, and for its features. Not only does it have a built-in DVD burner, it comes with three USB ports (two of which are USB 3.0), Gigabit Ethernet, 802.11n dual-band WiFi (Intel Centrino Advanced-N 6230), HDMI, VGA, an SD card slot, a webcam, and a combination headphone and microphone port. Despite all these features, it doesn't feel overly heavy and it probably won't be tiring to carry to work or school every day. I just wish it was offered with a proper solid state drive rather than a conventional spinning hard drive and that it had a backlit keyboard and a screen with wider vertical viewing angles.