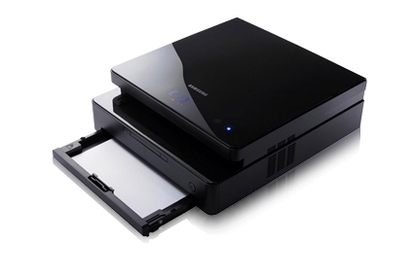 The very stylish Samsung ML-1630 flouts the monochrome laser printer's reputation for dull efficiency. It's a decent machine whose low-capacity input tray and pricey toner restrict it to individuals or small offices that wouldn't mind sacrificing some usefulness for style.

Samsung's ML-1630 is a personal monochrome laser that looks more like a concrete slab -- and has an idiosyncratic personality. It's not very practical, but it is, at least, inexpensive, and adequate for light office or home use.

Samsung's ML-1630 monochrome laser printer looks like two glossy-black slabs, one hovering over the other. Most of the printer is contained within the thicker, lower slab. The only nod to necessity is a clear plastic tongue that inserts into the front to catch pages as they print. The Samsung ML-1630's input tray is low-capacity (just 100 sheets), takes letter-size paper only, and is well hidden in the bottom of the printer; a front button pushes it open. The thinner, upper slab conceals the consumables, but the latch you need to open it is concealed underneath the slab's lip, near the output rollers -- not a place into which we would normally want to stick our fingers. There's no secondary input for thicker types of stock, such as envelopes or cards, so you can't use most such items with this printer.

You'll find what passes for a control panel on the Samsung ML-1630's top slab: a ticker-tape-like grid of LEDs that flash words or graphic patterns; a smattering of error icons that light up as needed; plus a couple of illuminated, touch-sensitive icons for cancelling jobs or turning off the aforementioned items (but not the printer, as you might assume; that button's in the back).

To supplement this Times-Square-like light show, an icon of the printer, installed in Windows' system tray, brings up on-screen status alerts in plain English and includes buttons that lead to helpful, context-sensitive troubleshooting guides; driver settings; or online supply ordering. The Samsung ML-1630's PDF-based User's Guide is helpful and detailed, though it suffers sporadically from bad translation.

Can this thing print? Yes. Text pages appeared at an average rate of 17.2 pages per minute (ppm), while photos topped out at a reasonable 6.2ppm -- good clips for a home or small-office model, though the HP LaserJet P1505, which has the same price, was significantly faster on both counts. The Samsung ML-1630's text samples we printed looked delicate, but black and precise. Photos tended to come out dark and showed slight banding, but were satisfactory.