Plenty of megapixels and a wide-angle lens. 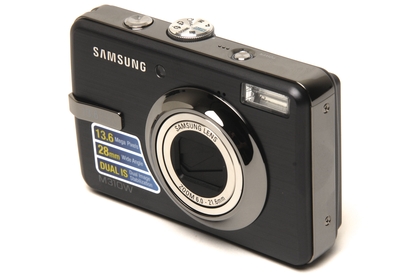 Apart from not being a particularly speedy camera, the M310W acquits itself admirably.

Samsung’s M310W is a compact and powerful point-and-shoot camera that boasts a high megapixel count and a versatile lens. There are a few niggles that stop it from being perfect, but overall it’s a strong competitor to Canon's IXUS 980 IS.

Just like the IXUS 980 IS, the M310W packs a range of manual shooting modes and adjustments — similar to those offered by a larger, more advanced camera — into a small, stylish body. We found the camera size a good compromise between form and function; it’s easy to fit into a pocket but its size doesn’t hinder access to all the controls. It’s under an inch thick, 61mm high and 92mm in length — smaller, in fact, than the IXUS 980 IS.

When it comes to technical specifications, the M310W doesn’t disappoint either. 13.6 megapixels is nothing to sneeze at, and a 3.6x optical zoom is more than versatile enough for most situations. The fact that the wide-angle end of the lens — its lowest zoom point — is 28mm is also a boon, since it’ll enable you to easily take group photos and other wide shots.

The combination of a good lens and a high megapixel count means that the pictures the M310W captures are very sharp and precise. They rival photos taken by some of the best compacts we’ve reviewed, and there wasn’t any significant over-sharpening.

At full zoom we were able to notice a very slight softening towards the corners of photographs, but this is only noticeable during pixel-peeping and won’t bother most people. There was only a small amount of haloing and fringing in high-contrast areas, which speaks volumes about the quality of the sensor.

The camera is able to capture frames with an ISO speed of anywhere between 80 and 3200. All settings up to 400 were perfectly usable, with ISO 800 introducing significant grain. Although it’s theoretically useful to have the ISO 1600 and 3200 settings, we can’t think of a situation in which they’d be useful for capturing a photograph that you’d want to show others — the levels of grain are too high.

We found the default colour balance biased towards reds by default, with an equally inaccurate green setting. Blues, however, were accurate and the images captured by the camera were vivid and pleasant to look at.

Its speed wasn't fantastic. A start-up time of 2.3 seconds was below average, while a shot-to-shot time of a little over two seconds was also disappointing. Thankfully shutter speed was under a tenth of a second and the burst mode was able to capture 2.5 frames per second.

With all the other standard functions for a high-end compact camera — face detection, optical and digital image stabilisation and various scene capture modes — the M310W is only slightly hampered by its speed. It’s a worthy adversary to other high-end digital compacts.