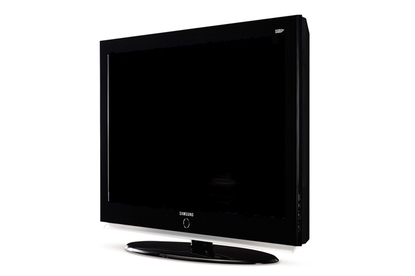 For watching Blu-Ray, HD-DVD movies, or playing HD games consoles, the Samsung LA46F71BX performs quite well, although its DVD playback leaves a little to be desired.

Leading the charge toward 1080p High Definition, Samsung has come to market with the 46in LA46F71BX LCD television, designed and optimised with Blu-Ray playback in mind. When running 1080p content we found the image quality to be superb but in Standard Definition and when connected to a PC, the performance was hampered by image noise, discolouration and distortions. When it comes to Standard Definition content, this was forgivable due to the limitations of scaling 576p content to 1080p. However, the PC connection issues were disappointing, especially when you consider the high standard set by previous Samsung models.

To test the 1080p capabilities of the unit we viewed the Blu-Ray film S.W.A.T. using the Samsung BD-P1000 Blu-Ray player. While this isn't the optimal film with which to test the unit, it was the only one made available to us at the time of review. Naturally, the level of detail we witnessed was far beyond that seen on DVDs and the panel displayed the images flawlessly. We detected no undue noise, distortion or discolouration at all. The black levels were not the best we have seen on an LCD television but they were very good and the colour was more than acceptable. Like other Samsung units, there was noticeable over saturation of red, but unlike those units, this time around Samsung has included tools to correct it, in the form of brightness and contrast controls for the red, green and blue levels. This replaces the usual six-axis colour control and is quite simple to use, easily correcting the overemphasis on red without affecting the other colours.

We also set the Xbox 360 to 1080p resolution to perform HD gaming tests. Delving into the post-apocalyptic world of Gears of War we were extremely impressed with how well the panel displayed the image. Gears of War is already a spectacular game but to see it in 1080p on a 46in panel with no flaws whatsoever is simply awesome. We paid careful attention to particles, curved edges and fast motion (which is most of that game) and all were displayed effortlessly. For 1080p content, the LA46F71BX is top notch.

Switching the Xbox 360 over to 720p, we performed some HD gaming and HD video tests. The results were similar to the 1080p test results in that we found was the same correctable over-saturation of red. However, we also detected a noticeable over-sharpening on text and edges which, by reducing the sharpness level to zero in the menu, we were able to remove.

Since the LA46F71B has a native 1080p resolution, it needs to create 1080 lines of pixels to display an image. Standard Definition signals are only 576 lines of pixels so in order to display them full screen extra information that was not in the original source video needs to be created by the video processing chip inside the television. Even though these processors do an admirable job, scaling the image to almost twice its original size will always cause a host of image quality degradations. Therefore, when we began testing the Standard Definition performance of this unit, fact that it was not nearly as impressive as the HD capabilities came as no surprise..

Things started off well enough. In our still image tests we used Digital Video Essentials and the Philips CE2006 Demo DVD and like the HD tests, the only problems we found here were over emphasis on red and over sharpness, both of which were reasonably correctable. All the greyscale tests were flawless and the contrast tests showed no stepping and excellent separation between light and dark areas.

Unfortunately when we viewed the lobby scene from The Matrix things weren't so rosy. There was magenta discolouration on the wall textures, and pixilation on both edges and the myriad rubble and dust particles. Even after calibration, these problems were still apparent. In addition the whole image was rife with noise, more noticeably in darker areas and there were contrast issues whereby harsh transitions from white to black were often met with pixilation or stepping.

In the past, the image quality on most Samsung units via PC connection was exceptional but the LA46F71BX did not live up to the same standard. We connected via VGA D-Sub at a 1920 x 1080 resolution and found the desktop clarity and colour reproduction to be exceptional. However, when we ran our test program, DisplayMate Video Edition, we found pixel fluctuations on all the moire test patterns, and some discolouration in the coloured text tests. There were also aberrations in low greys as well as yellow, red and blue discolouration along the darker half of the grey scale. Concerned that this may be a problem with the source signal or the connection type, we changed to a higher specification machine and connected via HDMI. Most of the problems disappeared but new ones were created.

That notwithstanding, the HDMI connection did seem to eliminate the discolouration and problems but the moire and focus matrix resolution tests both still displayed varying degrees of distortion. These distortion issues can be seen as a lack of definition and pixel precision when running applications that are graphics intensive or when watching video. Chances are, many people won't notice it all that much but if they were to do a side-by-side comparison with a unit that doesn't have these issues, the difference would be noticeable.

Continuing their established aesthetic, the Samsung LA46F71BX has a piano black bezel, chassis and stand and a bottom mounted speaker system. The ports on the rear consist of two HDMI, two component, one composite, one 15-pin D-Sub and a PictBridge connector. The side panel has an additional composite port, an S-Video port and a memory card reader.

The free to air television tuner is only analogue; you'll need exceptional signal strength to get a good image from it and, even then, it can only look as good as a Standard Definition DVD. We highly recommend picking up a High Definition set-top box to use with this panel.

The sound quality of the speakers is good and on par with many television speakers that we've looked at. They have a slightly truncated treble range and both muted and muddy bass at times, but the mid tones are clear and considering they are TV speakers, they do their job well enough.

The LA46F71BX isn't a perfect television but it has some strong points. If you are planning to purchase a Blu-Ray player or play High Definition games at 1080p, then we recommend this unit as it performs these tasks beautifully. However, for Standard Definition or PC connection, you may want to look elsewhere.