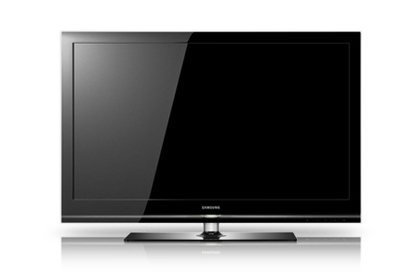 The Samsung LA46B750 packages very good picture quality and excellent sound with the ability to play media files from USB storage or your networked PC. And it does all that while being a remarkably easy-to-use HDTV.

The Samsung LA46B750 packages very good picture quality and excellent sound with and the ability to play media files from USB storage or your networked PC. And it does all that while being a remarkably easy-to-use HDTV.

This system earned an overall score of three and a half stars (Very Good) in PC World Labs' image-quality tests. The Samsung LA46B750 is a 200Hz LCD, and that fast refresh helped this TV excel on the Labs' motion tests. This model scored 4.5 out of 5 stars — the highest we've seen so far — on several tests intended to determine how well a TV can handle vertical, horizontal, and diagonal motion, so it's an excellent choice for action movies or sports. It also scored particularly well on brightness and contrast.

Not that it was perfect, even in those areas. Our judges complained about certain scenes looking dull, others appearing too bright, and still others (especially Chapter 12 in the Phantom of the Opera DVD) seeming "a bit too yellow."

Image quality isn't the only thing that Samsung gets right with the LA46B750: This model also sounds about as good as you could reasonably expect a TV to sound. You have to turn the volume all the way up (which I'm not suggesting) to hear any strain. The speakers have enough power to give a loud organ blast its intended effect, and the SRS TruSurround HD pseudosurround pulls you into the environment. It can't do the work of a real surround system, of course; cinephiles and music lovers will want to invest in a separate surround amplifier and speakers.

You can play back media from computers on your network via the Samsung LA46B750's built-in Ethernet jack. If you have a PC running a DLNA server (such as Windows Media Player 11 or the Windows Media Player 12 included with Windows 7) on the same network, you can access your music, videos, and photos directly from the TV. The user interface is easy to use and trouble-free, and it includes a photo slideshow feature with numerous options, such as your choice of musical accompaniment. Using the same interface, you can play media files stored on a USB device, such as a flash drive. Via USB, the Samsung LA46B750 can play only .mp3 audio files; over a network it can play any music that the DLNA software can support — for instance, .wma files off of WMP 11. The Samsung LA46B750 also has a modest built-in gallery of paintings, a number of recipes, one game, and other content. You might find the game fun, but the other bundled content isn't worth much. The few paintings are without titles and cropped to a 16:9 aspect ratio. And unless you want to put a 46in HDTV in your kitchen, the recipes are of little value.

Samsung has done a great job making the LA46B750 easily usable. The inputs are all well placed, so you don't have to be a contortionist to plug in a new Blu-ray player or DVR. The wizard that helps you set up the TV the first time you turn it on asks all the right questions, such as whether you'll be using this TV at home or in a store (this makes it easier to optimize the settings for best quality depending on the TV's location). The attractive, readable, and intuitive main menu also helps make this a straightforward TV to handle — and if that main menu is too much for you, just press the remote's Tools button for a shorter selection of commonly changed options. The often annoying job of changing inputs (from the cable connection to the DVD player to an old VCR, for instance) is made simple by an on-screen menu that places the inputs you actually use at the beginning of its list of all the TV's inputs.

That's not to say that the user interface is free of issues. Although the Samsung LA46B750's main menu offers explanations of its various options, those explanations aren't always helpful. The Energy Saving option, for instance, is described merely as 'Turns the Energy Saving function off.' (You have to go to the manual to discover that this feature lowers the brightness of the backlight across all inputs.)

Though the menus may have the occasional flaw, I'd be hard-pressed to find any at all in the remote control. It's large, and it makes its easy-to-find-and-push buttons even easier to use with a backlight that comes on in the dark. In addition to the above-mentioned Tools button, it has convenient buttons for Internet access and the media player.

According to the PC World Labs, this Energy Star 3.0-compliant HDTV consumes about 120 watts when in use, and less than a tenth of a watt (the lowest amount our equipment registers) when off.

The Samsung LA46B750's street price may seem high for a 46in HDTV, but when you consider its excellent images and sound, its Internet and home-network connectivity, and its all-around ease of use, it's definitely worth the price.