Samsung lays down its cards. 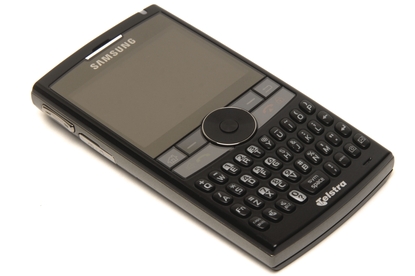 Samsung’s second smartphone to be released on Telstra’s Next G network, the i617T improves on its predecessor but remains let down by the lack of Wi-Fi.

Samsung’s i617T is the successor to the original BlackJack and it's known as the BlackJack II in other markets. Windows Mobile 6, built-in GPS and a 2-megapixel camera are all upgrades in this version, but the lack of Wi-Fi and a 3.5mm headphone jack remain problems for potential purchasers.

Aesthetically, the Telstra-exclusive i617T is a very similar device to its predecessor, with the biggest change being the glossy black finish. Although this does attract plenty of fingerprints, it certainly gives the phone a more stylish look and feel. The thin yet wide design suits the 2.4in display, though it unfortunately has a poor viewing angle and can be difficult to see in direct sunlight.

The i617T doesn't have a touch screen or stylus but it has a full QWERTY keyboard and a five-way navigational pad. Unfortunately, the three-way scroll wheel with back button seen on the original BlackJack has been removed. This is a shame as it was a very intuitive way of navigating the phone's particular interface. As it stands, the navigational pad does a decent job; conveniently, it doubles as a thumb wheel and can be rotated using your thumb for quicker access to menus.

The keyboard buttons are raised, but their small size and slightly cramped spacing are problematic when punching out long e-mails. It’s something you’ll eventually get used to, and shouldn’t be too much of a hindrance with practice. In a nice touch, Samsung has coloured the number keys on the keypad grey, rather than black, making them easy to differentiate when typing phone numbers.

The i617T runs the Windows Mobile 6 operating system, so it features push e-mail, as well as the synchronisation of contacts, calendar and tasks with Microsoft Outlook. A USB cable is included in the sales package, but it uses a Samsung proprietary connection instead of a regular mini-USB connection. The biggest disappointment remains the lack of Wi-Fi. Even considering the competitive asking price, it's still a feature we think should be included.

Mobile versions of Internet Explorer, Windows Media Player 10, Messenger and Internet Explorer are all present, while the Office Mobile package bundles Excel, PowerPoint, Word and OneNote applications. The upgrade to Windows Mobile 6 means you can both view and edit documents on the i617T — the BlackJack was only able to view documents, not edit them.

The i617T has improved the camera from 1.3 megapixels to 2.0 megapixels, but there is still no flash. Images can be saved to the 100MB of internal memory or the microSD card slot, located under a plastic cover on the right side of the unit. Samsung doesn't include a microSD card in the sales package. Also new is a built-in GPS receiver; there is no GPS navigational software installed, but we tested the GPS with the Google Maps application and it worked without any issues. Telstra also offers access to Whereis Navigator, one of the applications available on the Next G network.

Multimedia support is fair, with a range of compatible file formats. The overall package is let down by Samsung's insistence on a proprietary headphone jack rather than a standard 3.5mm jack. This jack also doubles as a charging port, meaning you are unable to charge the handset and listen to music simultaneously. Thankfully, Samsung has included an adapter in the package which allows the use of 3.5mm headphones, and an impressive set of ear buds is included in the box.