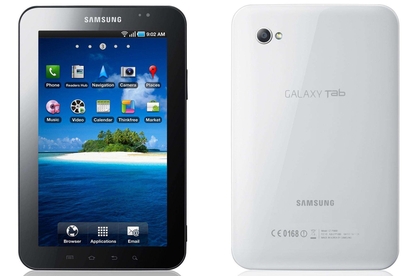 The Samsung Galaxy Tab runs the latest version of Google's Android operating system, 2.2 or Froyo (short for Frozen Yogurt). This is the same operating system found on many smartphones (like the HTC Desire HD), so the using the Galaxy Tab can feel like using an oversized smartphone. As Froyo has been designed to work purely on smartphones rather than tablets, Samsung has developed a few of its own apps, notably enhanced e-mail, contacts and calendar apps, the Readers Hub, which houses newspaper subscriptions, e-Books and magazines, and the memo note-taking app. The e-mail app in particular is a good example of the benefits of a larger screened device; when rotated to landscape mode it switches to a two column view, showing your inbox messages in the left column and the selected e-mail in the right column. 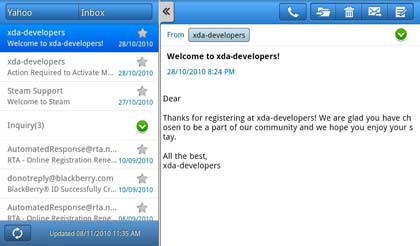 Samsung has developed a number of apps specifically designed for the Galaxy Tab's larger screen, including a functional e-mail app.

The size and resolution of the screen mean that some applications in the Android Market won't use the full extent of the Galaxy Tab's screen real estate. Samsung claims that at least 85 per cent of applications on the Android Market will work correctly with the Galaxy Tab. The company is in ongoing discussions with Google about the issue. Though it is yet to be confirmed, the Samsung Galaxy Tab is likely to receive future Android updates that will solve this issue; the next version of Android, dubbed Gingerbread, is designed with larger screened tablet devices in mind.

Because it runs Froyo, the Samsung Galaxy Tab has full Flash support, built-in wireless tethering, and the ability to store supported third-party apps on a microSD card. It is also far more flexible than the iPad; you can transfer files by dragging and dropping them from your PC and you don't need to run iTunes. Performance in general is adequate. The Galaxy Tab is fast and smooth, with no significant lag or performance issues, even when running multiple apps. Screen transitions are swift, scrolling through home screens is slick and loading times are minimal. This is true of all applications we tested — except the browser. The browser supports Flash content, is multitouch-aware, and automatically reformats text to fit the page when zoomed in, but the Galaxy Tab offers a decidedly inferior Web browsing experience compared to the iPad. Scrolling in particular feels clunky and not nearly as smooth as on the iPad, while pages take longer to load than we would have liked. There is also often a delay when swiping or zooming. On pages with heavy Flash advertising, these delays often render the page almost unusable.

One of the best features of the Samsung Galaxy Tab is built-in Swype text entry, an option that allows you to slide your fingers over the letters you want to type in a single motion, letting the software work out the word you're trying to write. Though it sounds awkward, Swype is very easy to pick up and surprisingly accurate. As with most on-screen keyboards, the software will learn as you type and add words you use regularly to its database. If you aren't a fan of Swype, we found the regular Samsung keyboard easy to type on in both portrait and landscape modes. Samsung has also included a nifty task manager app on the Galaxy Tab, which includes a home screen widget that displays how many applications are currently running. The app displays any active applications, while also providing an overview of storage and RAM. 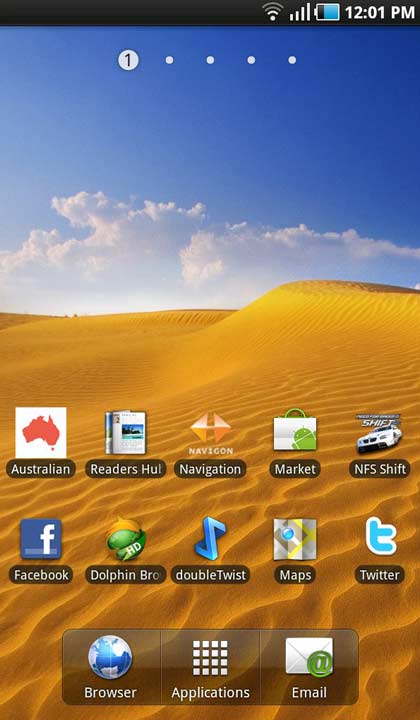 The home screen of the Samsung Galaxy Tab.

Despite being marketed purely as a tablet, the Samsung Galaxy Tab is also capable of making phone calls. Calls can be made using a wired headset, a wireless Bluetooth headset or using Galaxy Tab's built-in speakerphone. The front-facing camera is a handy inclusion here, as it allows video calling and can also handle conference calls. A range of accessories will be sold for the Galaxy Tab, including a stand that allows the tablet to sit upright on a desk or table, as well as a car cradle for navigation use.