After playing pretty much alone in the tablet space for almost a year, the Apple iPad finally has a realistic challenger in the Samsung Galaxy Tab. This 7in Android tablet is a hybrid device that sits somewhere between a largish touchscreen phone like 4in Samsung's own Galaxy S and the 9.7in iPad. The Samsung Galaxy Tab is well built, functional and responsive, but a little overpriced.

The Samsung Galaxy Tab's body is constructed entirely of plastic but this doesn't diminish its aesthetic appeal. The gloss black frame contrasts nicely with the gloss white rear. While it may lack the industrial appeal of the iPad's aluminium casing, the Galaxy Tab's 7in capacitive touchscreen gives it a much smaller footprint than Apple's tablet. This makes the Galaxy Tab more comfortable to hold and carry than the iPad; we particularly love the fact that it is easy to operate with a single hand, and slips easily into the pocket of a suit jacket. We also think it is the perfect size for use on public transport, where the larger size of the iPad can be a little overwhelming. We did note the glossy surface on the rear of the Galaxy Tab is quite slippery, so we recommend purchasing a case. 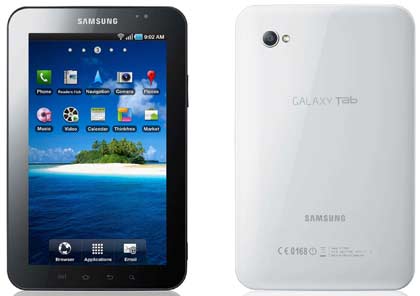 The Samsung Galaxy Tab's case is constructed entirely of plastic but this doesn't diminish its aesthetic appeal.

The Samsung Galaxy Tab boasts a standard capacitive TFT touchscreen. It's a shame the Galaxy Tab doesn't get a Super AMOLED display like Samsung's Galaxy S smartphone — Samsung says it opted for a regular TFT screen to keep the cost down, citing a shortage of AMOLED displays. Despite this, the Galaxy Tab's display is crisp, bright and clear and makes for a pleasant user experience. The only real shortcoming is that it is hard to see in direct sunlight. Like the iPad, it also attracts plenty of fingerprints during use. Unlike the iPad, the Galaxy Tab has haptic feedback, meaning the unit will vibrate in response to user input. It also features dual cameras; a 3.2-megapixel camera with LED flash on the rear for photos and video, and a 1.3-megapixel camera on the front for video calls.

Below the screen are four touch-sensitive buttons for menu, home, back and search. The keys are backlit and reasonably responsive, but we would have preferred physical buttons: the touch-sensitive keys can easily be accidentally bumped. You also can't wake the screen from sleep by using these keys; instead you need to use the awkwardly placed power/lock button on the right side. The Galaxy Tab also has a few other minor design quirks; there is no LED notification light, Samsung has opted for a proprietary dock connector for charging and synchronising, and the Galaxy Tab doesn't charge via USB. Volume keys along with microSD card and SIM card slots reside on the right, while a built-in microphone sits on the left side. 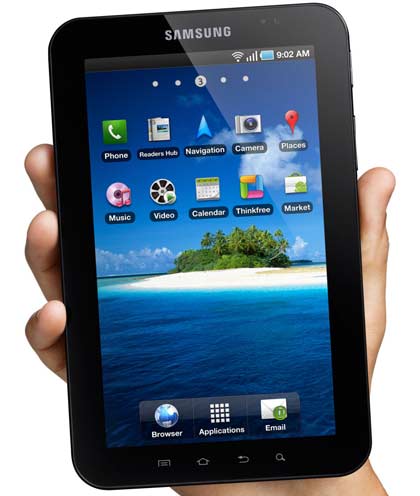 The Galaxy Tab's 7in capacitive touchscreen gives it a much smaller footprint than the iPad, making it much more comfortable to hold and carry.