The Galaxy S4 Mini is basically a smaller, cut down version of the original Galaxy S4 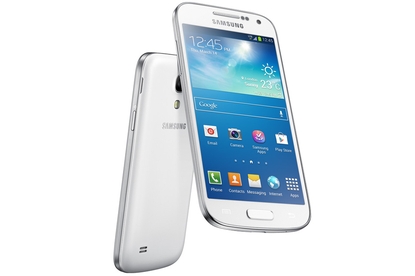 The Samsung Galaxy S4 Mini is another variant of the wildly successful Galaxy S4. It's basically a smaller, cut down version of that model, and it will shortly be available in Australia.

Samsung seemingly has a smartphone of every size, but the Galaxy S4 Mini marks one of its first premium devices at the smaller end of the scale. As its name suggests, its basically a smaller, cut down version of the original Galaxy S4, and it will shortly be available in Australia.

The key feature of the Galaxy S4 Mini is obviously its size. While it's slightly thicker at 8.9mm compared to the S4's 7.9mm, the S4 Mini is 12mm shorter and over 8mm less in width. This means it is targeted directly at users who might find the Galaxy S4 and other flagship smartphones just too large to comfortably hold and use.

To achieve the Galaxy S4 Mini's cut down dimensions, Samsung has obviously had to make some compromises. The most obvious one is that the 4.3in screen has a qHD resolution of 540x960 compared to the full HD resolution of its larger brother. While this is a downgrade, it shouldn't be a huge detriment to most average users. Text won't be as crisp and clear as larger devices, but the super AMOLED screen should still be bright and clear.

The Galaxy S4's camera has also been downgraded (from 13-megapixels to 8-megapixels) but unless you regularly print enlarged photos taken with your smartphone, most users won't notice the difference. The rear-facing camera doubles as a 1080p video recorder, while there's also a 1.9-megapixel front-facing camera for video calls.

The Samsung Galaxy S4 Mini is powered by a 1.7GHz dual-core Qualcomm Snapdragon 400 processor, has 1.5GB of RAM and comes with 8GB of internal memory. A microSD card slot allows for memory expansion. The device is 4G capable and will therefore work on Telstra, Optus and Vodafone's 4G networks in Australia.

The Galaxy S4 Mini will come with the 4.2 Jelly Bean version of Google's Android software and naturally comes skinned with Samsung's TouchWiz software. Most of the original Galaxy S4's features are carried over to the S4 Mini, with the exception of Air View, Air Gestures, Smart, Scroll, Smart Pause and Smart Rotation, among others. Most of these features are gimmicks that you won't use often, so their absence isn't a real issue. The likes of Group Play, S Translator and S Health are all included.

Optis will sell the Galaxy S4 Mini for $576 outright from early September. It will also be available on a number of Optus plans including a $5 monthly handset repayment fee on the $50 plan, a total of $55 per month over 24 months. The plan includes 450 minutes of standard voice calls, unlimited SMS and MMS messages, and 500MB of data.

Telstra will sell the Galaxy S4 Mini in-store and online from Tuesday, 17 September. The Galaxy S4 Mini will be sold on four Telstra plans, all over 24 months, including a $4 monthly handset repayment on Telstra's $60 plan. The plan includes $600 worth of calls and MMS messages, unlimited SMS messages, and 1GB of data per month.