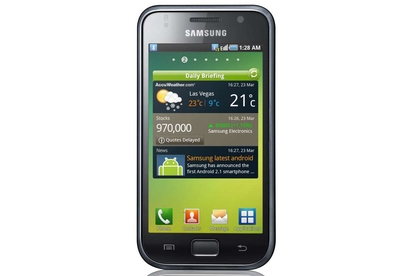 The Samsung Galaxy S possesses the best display we've seen on a smartphone (though we're yet to review the iPhone 4). However, this Android handset is let down by a few niggling annoyances, particularly the all-plastic build and the TouchWIZ UI, which that lacks the polish this premium smartphone deserves. The Galaxy S is a great smartphone, but it sits a notch below HTC's Desire.

Launching in Australia mere weeks before Apple's iPhone 4, the Samsung Galaxy S smartphone definitely has its work cut out for it. This Android-powered smartphone is a delight to use, thanks to one of the best displays we've ever seen on a smartphone and Google's Android operating system. However, an all-plastic body and a user interface that feels unpolished in parts detract from its appeal.

Check out our Samsung Galaxy S vs iPhone 4 smartphone showdown.

The Samsung Galaxy S has the most impressive display we've ever seen on a mobile phone (though we are yet to review Apple's iPhone 4 with its "retina" display). The 4in "Super AMOLED" screen is unbelievably bright, crisp and clear and its performance in direct sunlight has to be seen to be believed. Text on the capacitive touchscreen can clearly be read even if you're at an almost 90-degree angle from it, and there is no colour shift when viewing the display from off centre.

The Samsung Galaxy S is quite large because of its sizeable screen, but it is only 9.9mm thick. This means it's one of the thinnest Android smartphones on the market. It's also very light for a device this size, largely due to the all-plastic casing. Though we appreciate the light weight, we aren't a big fan of the Galaxy S's plastic parts. It is reasonably well built, but it lacks the premium feel of many of its competitors, such as the HTC Desire. A perfect example is the rear battery cover, which when we removed it felt cheap and flimsy.

The Samsung Galaxy S is controlled mainly via the touchscreen. It supports multitouch, so you can pinch on the screen two zoom in and out of various applications (including the Web browser and Google Maps). The display is very responsive when sliding between home screens or tapping icons. A physical menu key and touch-sensitive option and back buttons sit below the display, while external volume controls are located on the left side. A power button that doubles as a screen lock key sits on the right side, but you can unlock the screen by pressing the menu button, just as you can on the iPhone.

The Samsung Galaxy S runs the 2.1 version of Google's Android OS, but will be upgradeable to Android 2.2 in the "coming months". It provides all the features and benefits of Android but uses Samsung's TouchWIZ user interface, in a similar manner to HTC phones employing the custom Sense UI. Like Sense, TouchWIZ gives you seven fully customisable home screens that let you add any number of live widgets, shortcuts and folders. Samsung has included some widgets of its own, consisting of Daily Briefing (customisable weather, finance and news information), Feeds and Updates (Facebook, Twitter and MySpace aggregator), Buddies Now (a rolodex of photo contacts), as well as a number of clocks and a reminder widget called 'Days' that lets you create an advanced memo with an image.

Though the Feeds and Updates widget is fairly useful and stops you having to log in to separate applications all the time, it lacks some advanced features, such support for multiple Twitter accounts and URL shortening when tweeting. We didn't find any of the other Samsung widgets particularly engaging, though the smart alarm feature — where the standard alarm can play a nature sound such as chirping birds or a waterfall for a specified time period — definitely caught our attention.

Unfortunately, Samsung has seen fit to alter various aspects of the standard Android UI, including the menu icons. We feel these changes make the interface less attractive. It may be personal preference, but we think HTC Sense looks and feels much more polished than TouchWIZ. Despite the 1GHz processor, the same one used by the HTC Desire, the Samsung Galaxy S often felt sluggish during testing, even when performing basic tasks like opening and closing applications.

Underneath TouchWIZ, the Samsung Galaxy S offers the regular features and functions of Android 2.1, including the Android Market for third-party apps, an excellent notifications taskbar and automatic and seamless synchronisation with Google services. The phone automatically synchronises your Google calendar, mail and contacts over the air and Samsung has confirmed the Galaxy S will be upgradeable to the 2.2 version of Android, dubbed Froyo. Unfortunately, you still can't choose to save downloaded apps to the microSD card, and the Galaxy S remains an inferior multimedia smartphone when compared to the iPhone, with no real advanced settings or features. However, customisable music player applications can be downloaded from the Android market.

One of the best features of the Samsung Galaxy S is built-in Swype text entry, an option that allows you to slide your fingers over the letters you want to type in a single motion, letting the software work out the word you're trying to write. Though it sounds awkward, Swype is very easy to pick up and surprisingly accurate. As with most on-screen keyboards, the software will learn as you type and add words you use regularly to its database.

The Samsung Galaxy S has a good Web browser, but Flash won't be fully supported until the Android 2.2 update. The pinch to zoom function isn't as smooth as the iPhone's, but zooming in on a block of text automatically reformats it, making it easier to read.

Samsung has partnered with bookstore Borders and the Kobo eBook application is preloaded on the Galaxy S. Customers who purchase a Galaxy S smartphone through Optus by August 31 will receive a free eBook download — either The Slap by Christos Tsiolkas or Underbelly: The Golden Mile by John Silvester and Andrew Rule.

The Samsung Galaxy S we reviewed is a 7.2Mbps HSDPA-capable smartphone that runs on the 900MHz and 2100MHz 3G networks. A Telstra Next G version of the device running on the 850MHz band will be available in August. Other features of the Samsung Galaxy S include a 5-megapixel camera with autofocus, a built-in accelerometer, a digital compass and a GPS receiver. Battery life is a little disappointing but fairly similar to the alternatives — the battery barely lasts a day with push e-mail, location services and background data enabled.

Optus will sell the Samsung Galaxy S smartphone exclusively for four weeks from 1 July. The Galaxy S will be available for $0 on Optus' $59 'social' plan over 24 months, which includes 1GB of data and unlimited Facebook, Twitter, YouTube and MySpace access. Optus will also offer the smartphone on a range of business plans. The Samsung Galaxy S sold through Optus is not carrier-locked, so it can be used on other networks.

Samsung confirmed the Galaxy S would be available "though all major mobile phone carriers from August," so we expect to see the smartphone on Telstra, Vodafone and 3 immediately following Optus' month-long exclusivity period.