Samsung Galaxy 580 review: The Galaxy 580 Android smartphone doesn't skimp on too many features, but is not great value when compared to the competition 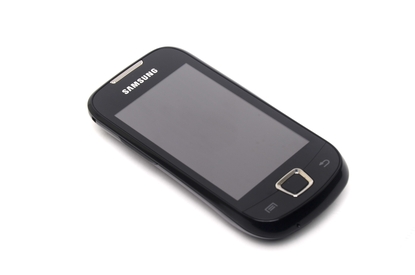 The Samsung Galaxy 580 Android smartphone is compact and feature packed, but it remains overpriced compared to alternatives, particularly the excellent LG Optimus One.

The Samsung Galaxy 580 Android phone is the third Galaxy-branded smartphone to hit the Australian market, following the flagship Samsung Galaxy S, and the Telstra-exclusive Galaxy 5. Though it doesn't skimp on too many features, the Galaxy 580 is overpriced compared to alternatives — particularly the excellent LG Optimus One.

Read our reviews on other top Samsung phones, including the flagship Samsung Galaxy S.

The Samsung Galaxy 580 Android phone has a similar look and feel to the Telstra-exclusive Galaxy 5, with a distinctive, rounded design and a curved back making it comfortable to hold. The gloss black finish is not particularly attractive though, and the Galaxy 580 rocks slightly from side to side when placed on a flat surface. We much prefer the design of the LG Optimus One Android phone.

The Samsung Galaxy 580 has a 3.2in capacitive touchscreen, while below this sit the standard Android shortcut keys (menu, home and back). The screen is responsive and easy to see in direct sunlight, though its resolution is not as high as the Optimus One. The small size of the display also means both the on-screen keyboard and the Web browser do feel a little cramped, though the addition of Swype text input, an option that allows you to slide your fingers over the letters you want to type in a single motion, is very handy.

The Samsung Galaxy 580 runs the 2.2 or "Froyo" version of Google's Android operating system and it includes all the regular features and functions of more expensive Android smartphones. The Galaxy 580 can have up to seven home screens for live widgets and shortcuts, and Samsung has also opted to use its TouchWIZ interface which includes Feeds and Updates (Facebook, Twitter and MySpace aggregator), and Buddies Now (a rolodex of photo contacts). As with all Android-powered smartphones, the software is highly customisable via third-party apps which can be downloaded through the Android Market — Google's answer to Apple's App Store.

The excessive amount of Optus customisation built into the software is an annoying aspect of the Samsung Galaxy 580, but the user experience feels snappy and smooth. The inclusion of multitouch aids web browsing, even if the Galaxy 580 is a little sluggish when loading graphically intense web sites. Only 153MB of internal memory is on board, but a microSD card slot for extra storage is included, and the phone comes with a 2GB microSD card in the box. Battery life is about what we would expect from an Android phone: the Galaxy 580 should last a full day, but it will need to be charged every night.

The Samsung Galaxy 580 is available through Optus in Australia for $0 upfront on a $49 post paid cap.