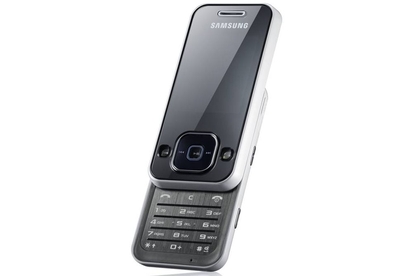 The F250 is an appealing music handset, especially considering its price. It won’t give you all the bells and whistles of more expensive phones, but it does a solid job regardless.

A stylish slider offered to pre-paid users, the F250 packs quite a punch for its asking price. This 'Music Edition' handset actually lives up to its name, sporting a 3.5mm headphone jack, reasonable music player software and a microSD card slot for extra data storage.

Samsung is best known for its sliders, and the F250 is another good example of a handset boasting a stylish design and reasonable build quality. This attractive handset features a mirror-style front, with white edging and an ice-blue rear cover with etched swirls.

The F250 features a spring-operated slider that feels smooth and sturdy when operated. Sliding the handset open reveals a rather small and flat keypad, with each row of keys distinctly separated by an indented line. Despite the flat nature of the buttons we found text messaging reasonably easy, though we would have appreciated the individual keys being slightly larger.

Built into the five-way navigational pad are music playback controls consisting of play/pause and previous/next track. These are accompanied by two selection buttons. The controls are comfortable to use and provide excellent tactility. Combined with a speedy interface, the F250 is certainly an easy phone to use.

Perhaps the only disappointing aspect of this handset is the mediocre display. It’s a small screen with a low resolution, making it less than ideal for using the 1.3-megapixel camera or playing video content. But considering the asking price of this handset there is little to complain about.

The F250 excels as a music player, mainly thanks to the inclusion of an FM radio and a standard 3.5mm headphone jack — the latter is often overlooked in music-orientated handsets. The music player itself is basic but easy to use and tracks can be sorted in a similar manner to an iPod — artists, songs, genres, albums and more. The lack of a preset equaliser is a negative, but there are basic repeat and shuffle play modes and you can access other features of the phone while having music play in the background. The A2DP Bluetooth profile is also present, allowing streaming to a compatible set of wireless headphones.

Aside from the music player, the F250 is a largely uninspiring handset with minimal features of note. Perhaps the best feature is music recognition — it's a similar service to Sony Ericsson’s Track ID whereby you record a section of a song and send it to a database to receive a message back with track and artist details. Unfortunately, the F250 isn’t a 3G phone, so this process does take a little while.

The photos taken by the camera are mediocre. SMS, MMS and e-mail messaging (all with T9 support) are included, as are a host of PIM features such as alarms, calendar, voice recorder, image editor, memo, stopwatch, world clock and calculator.