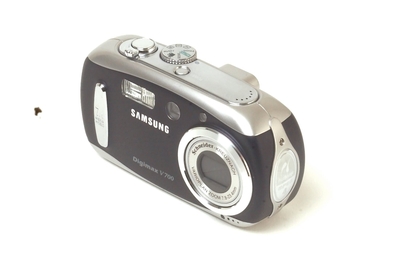 Whilst the V700 may have a solid design with an average feature-set, the image quality and shutter lag simply make it very difficult to recommend over any of the competition.

Every once in a while we are greeted with a product that makes us question what exactly the engineers were thinking. The Samsung Digimax V700 is one such device. Samsung haven't had much luck with their previous forays into the world of digital photography, and if anything, this model is a step backwards.

It starts out well enough; our first impression was one of a reasonable looking, quite intuitive camera. The body is constructed mostly out of metal and has a sturdy feel to it, befitting an advanced model. Our unit came in a dark blue colour, and we couldn't help but feel it looked a little like a children's toy, but the build quality was definitely above average.

The strong suite of the V700 is in the controls and interface. Being an advanced model, it offers a full range of manual features and many companies struggle to make these easily accessible. With their years of experience in the consumer electronics arena however, Samsung know how to craft an effective interface. All of the necessary controls can be accessed through the menu system; but they can also be reached through a single button on the face of the unit, which brings up a transparent drop down menu. Flicking between ISO settings has never been simpler.

Unfortunately the positives stop at the interface as Samsung's relative inexperience in the digital camera field means from here it is all down hill. We really struggled to find a single redeeming feature in the pictures we took.

Our single biggest problem was the noise which permeated pretty much every shot. On manual mode with ISO at the lowest setting shots were relatively clean, but no matter what sort of lighting conditions we tested under on any other setting (and most noticeably the AUTO mode) our images were fuzzed and grainy. It was too big a problem to ignore and had a huge impact on image quality.

When looking at one of Samsung's earlier models, the L55W, we commented on some of the most horrible colour fringing we had ever seen. Certain outdoors shots were accompanied with massive bars of blue or purple, millimetres in width. This atrocity has returned on this model and in some cases is even worse than its predecessor. Most cameras exhibit some sort of fringing in high light areas but it is generally not a problem unless you blow the shots right up. On our V700's pictures however, even at 4x6 inches we had areas of our shots with a strong blue tinge.

Making the situation even worse (yes, it can get worse!) is a general over-sharpening of images. We complained about this on the L55Wand like the fringing problem, it has returned here with a vengeance. Many of our outdoors shots had trees that almost looked drawn in, with a cell shaded effect that really wasn't pleasant to look at.

Colour saturation is a shining star compared to the other elements of the V700's shots, but it is still of below average quality. In the right conditions with a perfect array of settings we managed quite accurate colour reproduction, but we really struggled when there was no flash. This model had some of the strongest overcompensation we've seen; even in a brightly lit room our shots without a flash were extremely warm with a very pale look to them.

It is also worth noting that the V700 struggled shooting in very low light. Generally cameras have a small red beam that illuminates the target when there is not enough light for the auto-focus to function, however this model failed to do this adequately, resulting in blurred and underexposed images. Definitely stay away from night shots with this model.

Continuing our suffering even further we were horrified to discover a mammoth .25 to .30 seconds of shutter lag. This is huge compared to the average of about .08 to .12. The time between shots was also a concern, falling somewhere between 3 and 4 seconds. From power up to first shot was much more impressive at 1.5 to 2 seconds.

Features wise the V700 offers some small tokens that make it worthwhile but generally falls just on the positive side of average. Whilst it has full manual, shutter and aperture priority modes, so do all the other cameras in this category. What it does to distinguish itself is pack them all into a relatively compact body. Very few advanced cameras are as small as the V700, making it a potentially attractive choice if you really need all those features and a small form factor to boot. Samsung have implemented the popular TIFF shooting format on this model as well, which is a big boon for those wanting better quality shots. Write time for these files is quite speedy too, at about 6 seconds each.

That said, some of the other features are poorly implemented. On one hand the maximum ISO level of 400 disappointed us, but remembering our test shots we wound up thanking all our gods that it didn't go higher. The continuous shot mode is also on the lean side, offering a mere 3 shots at roughly .9 shots a second. Rounding out the package is a standard array of preset shooting modes, colour and sharpness options and the ability to store preset combinations of settings.