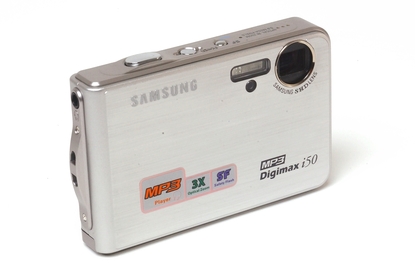 The big buzz-word in the technology world over the last few years has been 'convergence'. The amalgamation of different devices has brought together everything, from DVD players to hard disks, fridges and computers, all in a glorious symphony of multifunctionality. The most prevalent examples of this are the PSP, or the modern camera phone, saving both the hassle and space concerns of carrying around multiple gadgets. Indeed, digital music playback has been one of the most popular functionalities to be mixed and matched, thus it was inevitable somebody would eventually combine a camera and an MP3 player. The Samsung Digimax i50 is the first iteration of such a device, but does it sacrifice too much for the sake of extra features?

MP3 support is the primary selling point of the i50. It operates like a regular detachable hard disk; you plug it in, create a directory called MP3, and can then drag and drop files. The downside is, the camera comes with only 48mb of onboard memory, so you need to purchase a good sized SD memory card to expand your storage capacity, which will set you back another hundred dollars or more. Considering that most flash based MP3 players these days are rapidly shrinking into the realms of mere centimetres, and that they can be had for under $150 in many cases, we question the value of the i50's media capabilities. Most people will be happy with a good quality digital camera and a separate, flash MP3 player that they can clip to their pocket and forget about, and it will probably work out cheaper in the long run.

Despite not being the most useful feature in the world, the MP3 playback is solidly implemented. Sound quality was better than we expected, not stellar, but consistently clear and sharp. Bass could get a little muddy, and some string instruments had a definite tinny sound to them, but considering it is not the primary function of the i50, it was very well done. Disappointingly there was little in the way of options for the player. There were repeat and shuffle modes, but no equaliser settings and the playlist was difficult to manipulate.

The camera features on the i50 go some way towards making up for this. It is equipped with all the standard features, including ISO, white balance and exposure controls, as well as 13 preset shooting modes (including an extreme 1cm macro mode). There are also a nice list of colour modes and features, such as picture frame and montage. Video playback is the biggest strength, offering 640X480 video footage at 30 fps, and this is supported by a video stabilising feature, which helps to create clear, blur-free movies. The continuous shot function was not quite so robust, shooting at roughly a frame per second. Overall, the feature-set was above average for a point and shoot camera, and will satisfy all but photography enthusiasts.

It is worth noting that Samsung take a slightly different approach with their interface to most other camera manufacturers. The available options are broken down in many sub menus, which makes navigation that little bit easier. The downside is, they don't include the basic options in this menu (White balance, ISO, exposure), and so at first glance they appear not to be present at all. Once you spend a little time using the i50 however, the menu becomes intuitive and easy to use.

Image quality is the area the i50 really seems to fall down. In our testing, it performed below average, displaying a combination of problems that left us less than satisfied. Exposure compensation was terrible, leaving colours looking faded, washed out and in some cases, giving them a neon effect. With the flash turned on, in a dark room, this improved significantly, but that is not a situation most people will regularly encounter. Sharpness was equally poor, with edges blurring into each other, and areas of fine detail being almost indistinguishable. Image noise was also a big problem. It was less noticeable in many of our shots, but every so often we snapped one off that looked like it was covered in television static. These shots were incredible grainy, covered in white speckles and barely qualified as a proper pictures. Not all of our shots turned out like this, but even a twenty or thirty percent ratio is enough to make it a less than desirable purchase. We noticed this occurred most often when using the image stabilisation tool included on the camera. This succeeded in sharpening the edges, but significantly increased the strength of the image noise, and was definitely not a worthwhile trade-off.

We found the i50 to be slightly sluggish in our speed tests as well. Startup time was roughly two seconds, which was slightly above average, and the time between shots was a little less than that. The clincher was shutter lag however, which was almost a second in some cases; much longer than we've grown accustomed to.

The one thing Samsung have done extremely is the construction of the camera; the i50 looks and feels great. The body is a sturdy, metal design, with a simple set of controls that are ergonomically arranged. Despite having an MP3 player built in, the i50 is reasonable small, fitting comfortably into a pocket, and the sleek, horizontally grained shell looks extremely stylish. It feels like one of the most durable cameras we've held in a long time.

Battery life was less than average. After taking a few short videos, and listening to ten minutes of mp3s, we managed to take less than 120 shots before the camera battery died.