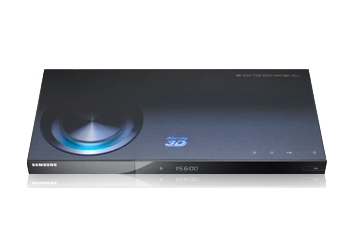 The interface for selecting your PC's media can be klutzy, though. For instance, after you pick Music, Videos, or Pictures from the main menu, you're asked to pick Music, Videos, or Pictures again. The first time, the BD-C6500 is asking what kind of media you want to view; the second, it's asking where to look for the files. If you don't give the same answer each time, you'll be told that it can't find, for instance, videos in your Music folder.

Even so, the interface has its good points. You can browse tunes by genre, artist, and other criteria. And if you organize your photos by tags, the BD-C6500's "keyword" browsing will help you find what you're looking for.

You can also view photos, and play music and videos, off a USB storage device, such as a flash drive. The player supports .jpg images, .mp3 and .wma audio, and several video formats, including XviD and DivX .avi files and MPEG-1 and -2.

And if you just want to watch a Blu-ray disc, you won't have to wait long. The BD-C6500 loaded the Independence Day disc in 33 seconds; only the Sony BDP-S570 did better (26 seconds). It also responded quickly to the remote's Pause and Skip buttons.

Speaking of the remote, it's well designed and easy to use. Although its size and shape aren't exceptional, its buttons are few, large, and simple to differentiate and press. It's programmable. Nothing is backlit, but the play-control buttons (Play, Pause, Skip, and so forth) glow slightly in the dark. The buttons for bringing up and navigating menus are directly below the play-control buttons, and almost as easy to reach.

The on-screen menus those buttons control have an attractive, wood-grain look to them. More important, they're largely intuitive (the above-discussed problem with network-based media is a rare exception). They're also informative, explaining the options in what is usually helpful language. The first time you turn the BD-C6500 on, a wizard guides you through the setup.

You can press either the remote's Info button or its Tools button for information on what you're watching (the Tools button also provides menus for changing the chapter, soundtrack, and other options). But some important information is still missing. For instance, the window won't tell you the time remaining (it gives you the time elapsed and the total time, so you can do the math), nor will it tell you the current audio format.

While the remote is excellent, the buttons on the player itself are anything but. Simply pressure-sensitive spots on the front panel, they give no tactile feedback. When inserting a flash drive, I accidentally shut off the player without realizing it.

Such disappointments are few in the Samsung BD-C6500. Superb images, very good audio options, Internet and multimedia capabilities, and a first-class remote make this Blu-ray player an excellent choice.