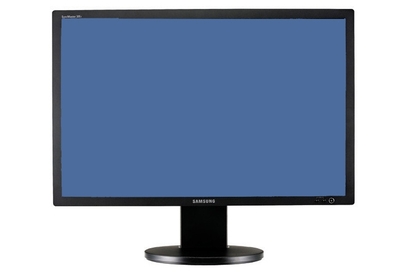 The Samsung 305T offers excellent, professional build quality and comes with four USB ports and an ergonomic height-adjustable stand. With an RRP of $2299.95 this is certainly a pricey peripheral, but if you search around you can find it on sale for less than $2000, which then compares favourably with 30in competitors from Dell and Apple. Hazro's model costs a lot less, but comes without the height adjustable stand or USB ports.

Stepping up to 30 inches involves more than just a leap in screen size and pixel resolution. The Samsung 305T, like all other similarly sized TFT displays, is a rather different beast to many of the 22in or 24in monitors you may be used to.

Although aimed at serious professional use by discerning users, the Samsung 305T is actually a far simpler product than you might expect.

First of all there is a distinct lack of control buttons: other than the power switch, all you get is a pair of buttons to control the screen brightness. There's also no menu button because the Samsung 305T doesn't provide any sort of on-screen menu.

There are no options to adjust colour or contrast and there's no way to switch inputs because the monitor uses only a single dual-link DVI-D connector — which also means you'll need a similarly equipped graphics card to run the Samsung 305T at its native 2,560 by 1600 pixel resolution.

Thankfully most modern graphics cards capable of driving the Samsung 305T also have drivers which allow screen adjustments to be carried out in software using an interface from the Windows control panel.

With a screen area of this size, you may find the Samsung 305T tempting for multimedia use, but for that we would recommend stepping down to the 27in model, which includes an HDMI interface and is still capable of displaying a full 1080p HD resolution.

However, the Samsung 305T brings more to the table than size. Most consumer-grade flat-panels use TN+film technology, which, although available at some temptingly low prices, has severe limitations in terms of viewing angles and colour reproduction. This display, however, is the flagship model in a range of monitors using a more expensive S-PVA technology.

S-PVA offers far wider viewing angles than TN+film, which means that colours don't shift as your head moves around — a common problem with the lower-cost technology.

The Samsung 305T claims to be able to display a colour range covering 102 per cent of the NTSC gamut, which is far in excess of the capabilities of standard displays and our tests confirmed that it can indeed produce a very wide range of colours although not quite as wide as Hazro's competing HZ30W.

This means if you're seriously into photo editing or digital illustration you'll be able to reproduce real-world colours more accurately on-screen.

However, Windows doesn't expect this kind of colour capability by default so it's important to install the correct driver, or better still calibrate the Samsung 305T with a hardware device to achieve best results.