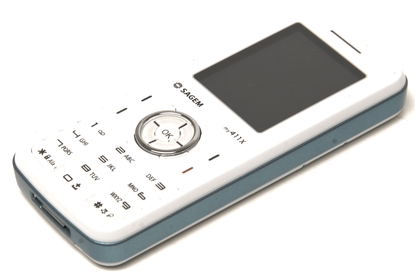 The Sagem my411X is a budget phone with no premium features. While there are many flaws with the phone's functionality and design, the relatively low cost and simple interface will no doubt intrigue some.

The my411X fits into Sagem's low- to mid-range line-up of GSM mobile phones. By no means extravagant in terms of style and features, the phone is suited for people who are simply looking for a cheap phone without a complicated feature set.

There isn't a lot to like about the my411X. It has a minimal, sleek design in a small package, but the feature set will be a turnoff for tech savvy users. Sagem offers Triband GSM connectivity with GPRS support, as well as some Bluetooth functionality and a 1.3Mp camera. The my411X also accepts a microSD card for expandable storage. We were disappointed to find that it did not support microSDHC cards, unlike its bigger brother the my511X. The placement of the SIM and microSD cards was clumsy. Users must remove the battery before inserting the cards..

The menu is a simple 3x3 grid interface reminiscent of a Sony Ericsson design. Users can easily move through the menu items using the five-way navigation pad.

Call quality was disappointing. As with the my511X, the call recipient's voice sounded tinny and mechanical. The recipient had a deep vocal register and the phone's speaker seems tuned towards higher-pitch frequencies. The recipient commented that the quality was marginally better than the my511X, but there's plenty of room for improvement. While some users may find this only a minor annoyance, the my411X's tendency towards higher-pitched frequencies can easily result in reduced call satisfaction.

One positive aspect of the my411X's feature set is the inclusion of a music player. Although the phone only has 10MB of internal storage, a microSD slot gives the phone the capability to play up to 2GB worth of MP3 and AAC files. The placement of the card slot underneath the battery means that the cards aren't hot-swappable, which may become a headache for music-inclined users. Nevertheless, the application interface is fairly easy to use. A dedicated side button on the my411X also allows the user to open the application without going through the menu. The player's only major downfall is that each song has to be added to the active playlist individually, rather than as an album or group. The use of proprietary earphones rather than a conventional headphone jack may be a consideration for music fans, though for the most part this won't affect the average user.

The my411X's connectivity is pared back, yet functional. The phone allows for a USB 1.1 connection through a proprietary cable, though we were disappointed to discover that this didn't actually come with the package. Given the phone's minimal 10MB of storage, the USB connection is really only useful for using the my411X as a glorified microSD card reader.

The phone's camera has a rather archaic VGA 1.3Mp resolution, though it is functional in most respects. Users have the option of 4x digital zoom and varying degrees of exposure but no flash. There are also some basic digital effects which can be applied to photos if desired. Nevertheless, the combination of the camera's low resolution and the shallow colour depth of the screen result in rather poor photos.

The major advantage of the my411X is its cost. With a minimal feature set and some functionality problems, this handset is clearly marketed towards those looking for a basic, cheap handset.