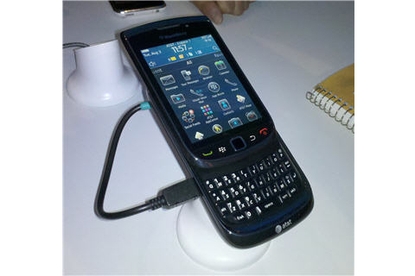 For business users who want something that is lightweight and practical but includes the multimedia and apps featured in the newest generation of mobile devices, the BlackBerry Torch 9800 could be their next smartphone. The emphasis here is on access to information; because the display is smaller and the resolution less powerful than most consumer devices out there, this can't compete with the more multimedia-centric consumer smartphones. But it should offer enough flexibility and ease of use to keep most BlackBerry users from leaving the fold.

When you have a product that has been successful for several years, but has fallen somewhat behind the times, it can be difficult to figure out what to change and what to leave alone.

With its new BlackBerry Torch 9800 smartphone, RIM seems to have navigated this line successfully. While it's unlikely that the Torch will draw consumers away from their iPhones and Android devices, at least BlackBerry users won't be completely left in the dust.

RIM introduced its new BlackBerry today in a joint press event with AT&T in New York. Mike Lazaridis, president and co-chief executive officer for RIM, talked a bit about how the company came out with its first BlackBerry in 1999 -- and then produced the new product.

After the formal presentation, I got some actual hands-on time with the Torch.

The new BlackBerry smartphone offers a 3.2-in., 480 x 360 resolution touch display. While it's clear and fairly sharp, the display isn't really comparable to the leading consumer smartphones -- for example, the iPhone 4's 3.5-in. display boasts a 960 x 640 resolution, while the Droid X has an even larger 4.3-in. display with a resolution of 854 x 480.

On the other hand, the unit weighs 5.7 oz., about the same weight as the Droid X, and is, at 2.4 x .57 x 4.4 in., about the same size as the iPhone 4. I found it very comfortable to handle and use, and it is small enough to drop into a shirt pocket without a second thought.

The phone features a slide-out vertical keyboard -- bringing it to a length of 5.8 in. when open -- that still has the rounded look and small but well-engineered keys typical of BlackBerry devices. Personally, I found the keys a little too tiny for comfort, but as is typical of BlackBerrys, I was able to "thumb-type" short messages with relative ease. Current BlackBerry users should be pleased.

The phone also includes four hard keys, including one to begin and one to end a call -- which, as a Droid user who only has access to virtual buttons, I've often wished for. Other features include a 5-megapixel camera, 802.11b/g/n Wi-Fi along with 3G broadband, a 4GB microSD Flash card, 512MB RAM and 4GB built-in storage.

The new BlackBerry 6 OS is elegant and simple to use and understand. All your apps reside on a "tray" that can be raised or lowered over your home screen. Your main apps are represented by icons on the home screen (you can also have icons for individual contacts and bookmarks). You swipe left and right to see other screens, including Favorites and Recent (for recently used apps).

One of the new OS features that RIM emphasized at the launch event is the new universal search. Just start typing, and the Torch will look for apps and information both on and off your phone that might be a fit. For example, I tried typing "weather" and got icons for a weather application and links to several weather-related Web sites. I started typing the name "Michael" and by the third letter, I was seeing relevant news items and contact names.

Another feature that was pumped up by company executives, and really did work nicely when I tried it, is the universal inbox. All e-mail, social network messages, etc. are visible on one display -- touch on a specific message, and it opens it in the application pertinent to that message. Hit the back key, and you're back in the inbox. Swipe sideways, and you have access to your RSS feeds.

According to RIM, the phone has full multitasking so that, for example, music downloads can occur in the background while you're in the browser or working in other parts of the OS.

No self-respecting smartphone today would dare to show its face without some kind of apps store. In this case, additional apps can be obtained using BlackBerry App World, which is accessible through an icon on your home screen.

Third-party developers are being given APIs that will allow users try apps before they buy them, purchase subscriptions, buy different levels (for, say, games) or include ads within the application.

For business users who want something lightweight and practical, but with the multimedia and apps featured in the newest generation of mobile devices, the BlackBerry Torch 9800 could be their next smartphone. The emphasis here is on access to information; because the display is smaller and the resolution less powerful than most consumer devices out there, this can't compete with the more multimedia-centric consumer smartphones. But it should offer enough flexibility and ease-of-use to keep most BlackBerry users from leaving the fold.

Barbara Krasnoff is reviews editor at Computerworld. When she isn't either editing or reviewing, she blogs at The Interesting Bits ... and Bytes; you can also follow her on Twitter (@BarbaraKrasnoff).