The Razer StarCraft II Spectre is a gaming mouse designed for real-time strategy games - and StarCraft II in particular. 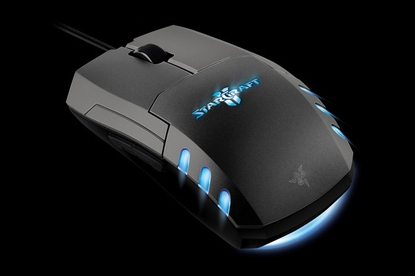 The Razer Starcraft II Spectre Gaming Mouse is a nearly perfect StarCraft II gaming mouse. The design's austere but attractive, the response feels tight out of the box and offers dozens of customisation parameters, and the best part of the package - Razer's configuration tool - packs in some of the best optimisation metrics we've come across, whether you're looking for simple macros and button-maps, or tournament-grade performance heuristics. Put another way, it's this reviewer's new full-time mouse. Bravo, Razer.

Razer, a company that makes all sorts of crazy game-logo-festooned computer peripherals, was kind enough to send over a minor trove of StarCraft II kit to evaluate. More, in fact, than we asked for, including an official StarCraft II Zerg Edition Messenger Bag. We were more interested in the Razer Starcraft II Spectre Gaming Mouse.

The Razer Spectre Mouse, modelled after the Terran faction in the game, is pretty much jam-packed with programmable StarCraft II-specific features. At $119, it's not the most expensive mouse money can buy, but then it's not your average chain-store standby either.

Right away you'll notice the Razer Starcraft II Spectre Gaming Mouse isn't wireless and probably wonder why not - that's now almost compulsory for high-end gaming mice. And then I noticed that the Spectre wields a 5600dpi (dots per inch) 3.5G laser sensor, offering what Razer calls its "ultrapolling" (1000Hz with 1ms response) technology. So is wireless too slow to keep up?

Not at all, it turns out. I poked around Razer's site and found a $199 Mamba mouse that's wireless and uses similar "ultrapolling" technology. In fact, Razer calls the Mamba's wireless "gaming grade" (whatever that means), so we're not sure why they didn't offer it on the Razer Starcraft II Spectre Gaming Mouse, given the enthusiast demographic it's marketed to.

I've been using a cheap wireless Logitech travel mouse for the past year or so. Moving a mouse around with a cable protruding north of the two buttons and scroll wheel felt a little weird at first.

And then it didn't. Consider it an acclimatisation curve that passes once you've used it for an hour or so. The tradeoff's that the battery-free Razer Starcraft II Spectre Gaming Mouse feels considerably lighter without sacrificing high quality heft and a solid center of gravity. The black and silver plastic pieces composing its body have a non-glossy matt finish that's smooth but not slick to the touch, making it easy to grip and reducing slippage if your fingers perspire under duress.

The cable itself comes sheathed in a braided mesh that feels more durable than the usual rubber cord casing. It takes a bit longer to work out the kinks (from bunching in the box) but it's less likely to tear or snap if someone pulls (or trips) on it accidentally.

Razer Starcraft II Spectre Gaming Mouse: As You Like It

The Razer Starcraft II Spectre Gaming Mouse offers five buttons to program: the usual two up top, a forward/backward pair situated on the left side, and the depressible, virtually noiseless scrollwheel.

The mouse ships without a driver disc and - tested with the 64bit version of Windows 7 Home - offers instant plug-and-play functionality, but you'll want to download the official StarCraft II driver from Razer's website (both Mac and PC versions are offered). It's about 22MB and includes the configuration utility. (Yes, we've officially arrived at the point where setting up a new peripheral is at least a two-stage, mandatory online process.)

That utility sports the same angular electric blue sci-fi style associated with the Terran faction in the game, and serves as a one-size-fits-all panel for Razer's additional StarCraft II peripherals. The Spectre section lets you change up the five button functions or what scrolling the wheel triggers, then save your choices to profiles.

You can disable the Razer Starcraft II Spectre Gaming Mouse's scrollwheel entirely, set buttons to auto-double-click, map single keys, and so on. If you're a tournament player, you're probably already wed to StarCraft II's 'grid' keyboard profile, but if you could use a button that double-click "selects all" units of a type or shift-clicks to queue movement, the Spectre has you covered.

If you'd like to craft macros, there's a tab for that as well, including options to "insert delay" between specific actions. Want to swap macros on the fly? You can do that too by assigning different macro profiles to the Spectre's buttons in the "assign buttons" panel.

For those who never feel quite at home with a mouse's "click" actuation, a three-stage button on the underside of the Razer Starcraft II Spectre Gaming Mouse lets you change the force required to depress the left-click button. Set it high and you'll have to push harder, or low, and it'll respond more like a button you can tap than click. Razer obviously wanted to make the Spectre as ergonomically satisfying as it is functionally. How many mice let you fiddle the actuation? The Spectre's the first to cross our radar.

If you want to deep-dive on the Razer Starcraft II Spectre Gaming Mouse's tracking resolution, you can tweak its DPI setting from 100 up to 5,600 (it defaults to 1,800) and assign up to five sensitivity stages with discrete DPI values. Want to optimise the sensitivity-to-accuracy ratio? You can. Turn down the in-game sensitivity (say to 1.0) while cranking up the DPI and you'll get pinpoint high-coverage performance with minimum effort.

There's even an option to configure accuracy by axis - different DPI settings correlating to the direction you move the Razer Starcraft II Spectre Gaming Mouse. If that sounds overly complex, remember that Razer designed this thing to anticipate tournament play must-haves.

Let's say you're an up-and-coming competitive StarCraft II player and you want to know how you stack up against someone else in simple mathematical terms. One way involves gauging your 'actions per minute' or APM. That's the number of discrete instructions you're able to fire off in the game every 60 seconds. Most non-specialist players average 40 to 50 APM, while some pros reportedly peak at closer to 300 when a match turns frenetic.

The Razer Starcraft II Spectre Gaming Mouse folds that idea into a fascinating feedback system sculpted with tiny rib-like lights on either side of the mouse's palm rest. The mouse monitors your in-game APM and the ribs-light display a different colour depending on your APM rate, offering instant feedback on your performance that's sort of like tracking reps on a weight machine.

And that's not all: you can set these to flash or show different colours when specific events trigger in the game. Want an alert when your base is under attack? Set a blinking effect. Calldown launched? Morph complete? Mothership completed? You can set those too, up to 13 total.

If 13 sounds stingy, remember that you're adding an additional feedback interface to, no pun intended, a blizzard of in-game information. It's thus probably best employed as a kind of silent klaxon for the most significant events. That it's there at all should thrill hardcore players who never met an option they didn't like.

The backlit StarCraft II logo and strip on the rear underside of the mouse can also be configured to flash different colours, expanding your feedback palette (well, if your peripheral vision's good, anyway). If you want to tweak the thresholds or change which colours trigger at different APM rates, you can set any of that as well. While APM rates by themselves aren't indicators of good gameplay - button mashing produces high APM rates too - if you're already a strong player, it's a valuable alternative way to gauge performance.

What doesn't the Razer Starcraft II Spectre Gaming Mouse come with? Wireless, as noted above. Also a mouse-sized carry bag, which - since Razer's calling this a tournament-grade mouse - would help when travelling (especially with the braided 7ft cable). And we'd like to see more than the 13 generic in-game event triggers in the alert panel, say options to focus on specific units or structures and not just "all units" (or structures) in general.

Our final quibble with this otherwise astonishingly complete mouse may in fact be an anomaly: initially, when we left-clicked anywhere on the screen, the pointer would slip slightly to the left. Not a good sign, given the Spectre's precision boasting.

After experimenting, we deduced it had something to do with the Artisan gaming mouse pad we were been using. We love the Artisan pads - they're made of resilient, non-spongy material that's higher grade than the usual floppy rubber rectangles you'll find in a chain store - but for some reason they clash with the Spectre's tracking laser. Dropped flush with my wood desktop, the Spectre's tracking shifted to perfect. Just be aware that your mileage may vary depending on the type of surface you place the Spectre.