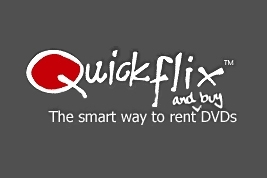 Quickflix may have the most DVDs in their catalogue but since they take so long to send them out, they aren’t quite the best in the industry.

With 19,000 titles in their catalogue, Quickflix dominates the competition in range and variety. Unfortunately, we found that while they have an enormous number of DVDs, they don't tend to send out very many at one time.

The website for Quickflix is attractive and very easy to use, much like BigPond, and keeping track of your selections and loans is a breeze. You can search based on many different criteria and the Quickflix staff have a recommendations section as well as the usual groupings like genre, coming soon, top 10 and the like.

When compared to the non-member pricing for BigPond, Quickflix is on-par. However, they do offer an ultra cheap $9.95 per month plan too. The only limitation on this plan is that you can only rent one DVD at a time and only 2 DVDs a month. The problem with this plan is that if people can only have 2 DVDs a month, they need more options as to what they get. The very nature of online DVD rentals is that you make a long list of things you want and whatever is available is sent to you thereby removing any control the end-user has over the process. If you don't care what movies you receive, so long as they are on your list, then the $9.95 plan would be ideal.

In our tests we choose 15 DVDs of which 10 were new and recent releases and the other 5 were older titles. Nearly a week after signing up, Quickflix sent us one DVD. Granted, it was a recent release but considering it was "Fantastic Four", we were not impressed. The quality of the film notwithstanding, we were more disappointed that we only received one DVD. We quickly sent it back and received other DVD 4 days later. Again, only one DVD. In our two week trial we only received 2 DVDs from QuickFlix.

One of the best features of the service is the way they pack their DVDs. They come in their own protective sleeve with a thick cardboard backing which has the DVD and title specific insert. This is great as it has a synopsis of the film and vital information like director, actors and other movie details. This is as close to having the actual DVD case as any of the rental service have come and was particularly useful. The DVDs we received from QuickFlix were all in near-perfect condition, However, since they only sent us two, it is hard to say if this is indicative of the quality of their DVDs as a whole.

We were disappointed by the trial period offered by QuickFlix. A two week trial is not long enough to get a good feel for the service and considering how few DVDs we received in that time, that point seems evident. When it came time to cancel our account, it took quite a few "Are you sure you want to cancel?" screens before we were allowed to cancel our account. Amusingly, the last screen offered us a free movie ticket to stay, but as alluring as that was, we cancelled nonetheless. Since cancelling, we have received quite a few follow up emails claiming we still have one of their DVDs in our possession. Since we sent them all back, we spoke to their customer service team who were extremely helpful and told us that if the DVD did not show up in their system within two weeks, that we would be sent a statutory declaration to fill out and return stating that we had returned it. We felt that having to complete a Stat Dec was a little excessive, but as much as it is a pain, it beats being charged for something you have returned.

QuickFlix has a great range, easy to use website, reasonable pricing plans and good customer service but was less than impressive with its DVD turnaround and trial offers making it number two in our April DVD Rental Services Roundup.