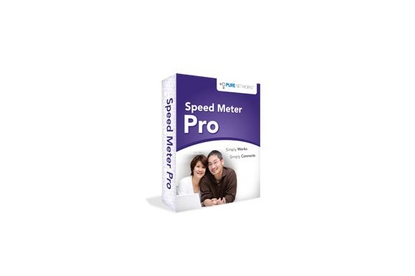 The bottom line? Speed Meter Pro does a very good job of tracking and analysing network performance issues, but by itself it simply doesn't do enough. If you want a full-blown network troubleshooting tool, you'll have to buy the combo.

Like most other computer owners in the world, you've probably become a network administrator by default, forced to handle the myriad problems that can bedevil your home network or small-office network. Pure Networks' software app, Speed Meter Pro, can help you do the job — but only to a point. Speed Meter Pro focuses on network slowdowns and ignores other issues such as IP woes, making it only a partial salve for the beleaguered.

Still, what it does do it does exceptionally well. Install the program, and it automatically creates a network map that shows every device on your network, including your router. It also scans your PC and the network for problems, such as too many applications and devices trying to use the network at the same time; then it suggests solutions.

Speed Meter sits in the background, monitoring network performance and popping up alerts and accompanying recommendations whenever it detects a slowdown. You can also use it to troubleshoot network performance. For example, if you notice that an Internet connection on one PC seems particularly sluggish, open Speed Meter and it will show you which PCs and applications are using too much network bandwidth. The program also tracks your Internet use and bandwidth over time.

Unfortunately, Speed Meter Pro can't solve all of your network woes: It won't detect and resolve problems related to sharing printers, IP conflicts, and network setup. For that, Pure Networks, has a companion product, called Network Magic. You can buy the two in a bundle for $US65.