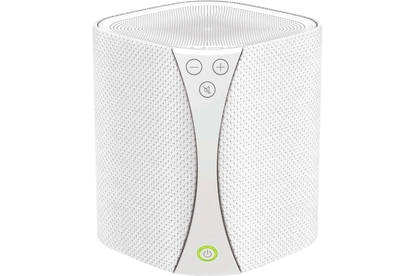 Pure’s Jongo S3 is, in and of itself, a great wireless speaker. It’s versatile, powerful, and sounds good. We do think it’s too expensive, though, and there’s a big trade-off inherent in the wireless streaming design.

The Jongo S3 is part of a new family of wireless speakers from Pure. It has integrated Wi-Fi and a Bluetooth dongle, an accompanying app for iOS and Android, and a 360-degree omnidirectional sound design. With an internal rechargeable battery, it’s meant to accompany you to picnics and parties.

The Jongo S3 is an interesting shape. It’s not a cube and not a cylinder, but sits somewhere in between with vital dimensions of 135mm x 115mm x 115mm, and is appreciably heavy at 1217g.

The Jongo S3 we tested had a white-on-white finish, with two fabric speaker covers that can be removed and replaced with more garish inserts in Burnt Orange, Green, or Mango. There’s also a ‘Piano’ black-cover-white body model and an entirely black one.

The ‘front’ of the Pure Jongo S3, a thin strip that runs between two of the faces, houses three buttons for volume up, down and mute, and a power button with an integrated multi-colour LED (green for power, red for start-up, orange for Bluetooth, and so on). Above that, there’s a Pure logo and a perforated top panel — the reason for which we’ll explain soon.

Around the back, the S3 has a small LCD screen, a button to switch between Wi-Fi and Bluetooth wireless audio modes, an Audio button for adjusting the sound characteristics of the speaker — again, the reason behind that soon — as well as a 3.5mm auxiliary jack, a 9V DC power input, and a USB port, into which an external Bluetooth dongle is inserted.

Look on the bottom of the speaker and you’ll see a screw holding on a door behind which Pure keeps the Jongo S3’s ChargePak battery — it’s a beefy 8800mAh lithium-ion unit.

For the majority of our testing, we tried the Pure Jongo S3 via Bluetooth from our Galaxy S4 smartphone, as well as using the wired 3.5mm connection from a Dell notebook.

The arrangement of the speaker drivers inside the Jongo S3 is one of its biggest selling points. Upon each face of its roughly-square sides, there’s a 3/4-inch tweeter responsible for high-frequency notes — this is the omni-directional setup that means you can throw it in the middle of a picnic blanket with everyone clustered around it equally catered to.

Beyond those four tweeters, though, there’s a single 3.5-inch woofer driver that fires upwards through the centre of the speaker. It’s got a solid base to work from, with the weighty ChargePak rechargeable battery below it, and the more generally-omnidirectional nature of mid- and bass notes is well suited to an open-firing design like this.

The arrangement of the S3’s drivers means that you’re able to hear an equal portion of clear and well-rounded audio whichever side you’re listening to the speaker from. You can also disable the omni-directional firing with a button on the back that switches between various audio modes, one of which is a combined-stereo setup that only uses the two tweeters on either side of the volume control buttons.

The sound that the Jongo S3 produces is very well-rounded, with a good measure of bass and clear treble. As compact portable speakers go, it’s definitely one of the best we’ve heard, handily beating the UE Boom in the sound department (although it is twice the price).

Pure promises 10 hours of battery life from the Jongo S3 — that’s more than enough for a lazy picnic or an afternoon by the pool, although if you’re having an impromptu house party playing the speaker at maximum volume will likely shorten its battery life significantly. It didn’t take more than a couple of hours for the Jongo S3 to recharge from flat to full, too, so it’s easy to keep topped-up for when you need it to be portable.

The Pure Jongo S3 also supports Wi-Fi connection to your smartphone or tablet or other Wi-Fi-enabled device, and there’s a Pure Connect app, which lets you stream any one of a thousand Internet radio stations, access the Pure Music subscription music-on-demand service, and play any music saved to your device through the speaker at high quality.

You can also hook up a second Jongo S3 simultaneously over Wi-Fi, setting up each speaker to play the same combined-stereo soundtrack, or with each individual speaker handling stereo left and stereo right channels — like a big wireless stereo system.

There’s one huge caveat with the Wi-Fi mode and multi-speaker setup, though — you can’t use any streaming music services like Rdio or Spotify, as these subscription services aren’t included within the Pure Connect app, which is the only way to stream music over Wi-Fi. If you want to use one of these services, it currently isn’t possible — your only option is streaming over Bluetooth.

The Jongo S3 is a well-made, portable, fully-featured wireless speaker. The inclusion of Wi-Fi is a good one and the inclusion of a multi-speaker mode is a good one, but both come with the caveat of no streaming music apart from Pure’s own subscription.

It’s quite expensive for a speaker, but it has a clear advantage over competitors in its well-rounded sound quality. If this is the most important aspect for you, then the Jongo S3 is worth its asking price.