Pure's Contour 100Di digital radio is well constructed and looks stylish and modern. It sounds good as well considering its small size and slim profile. The only thing we don't like is the remote control.

The Pure Contour 100Di is a digital radio with a built-in iPod, iPhone and iPad-compatible dock. It’s small but is able to produce good sound at moderate volumes. We don’t like the remote control, though.

The Pure Contour 100Di is an interesting shape. Every panel other than the the base is gently curved, with the semicircular body of the Contour 100Di mostly covered in soft fabric to cover the speaker grills.

The body of the radio looks simple, and vaguely futuristic in a minimal way — the design reminds of us of the radios in the video game Portal.

The Contour 100Di feels well built. It’s made out of plastic with a few metal accents, but it feels sturdy and has a reassuring weight to it.

At the base of the front fascia is a multipurpose LCD panel, which shows the current time, audio input and other basic information. Above that is the Pure logo — but push the right side of this panel, and it spins around in a vaguely Indiana Jones-esque manner to reveal an iPod dock.

The dock doesn’t have any sides to it, so you can connect any Apple device of any size to the Contour 100Di. We tested everything from an iPod Nano to an iPhone to a new iPad in the Contour 100Di’s dock, and everything fit comfortably. The dock is wide enough that iPads are secure — we don’t think there’s much chance of one falling off the dock even if it’s bumped. 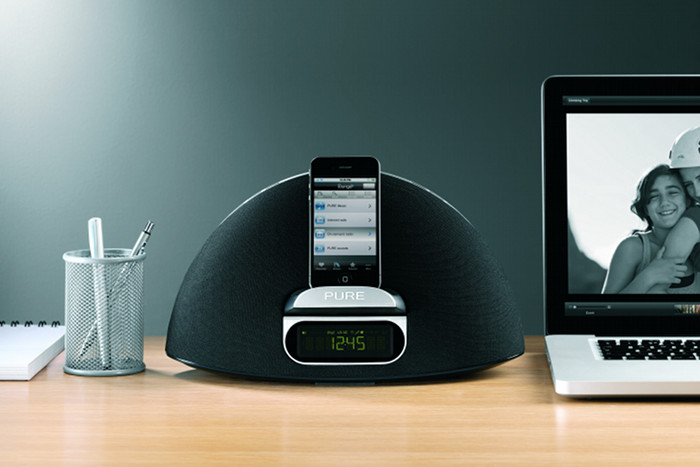 Using an iPad in the Pure Contour 100Di does block the speakers slightly, but this doesn’t have a significant effect on the digital radio’s sound quality.

The credit-card-style remote control that comes with the Pure Contour 100Di is not great. All the remote control’s buttons are set out in a six-by-three grid and are all the same size. Despite labels on each button, it’s easy to hit the wrong one.

If you’re predominantly using the Contour 100Di to listen to an iPod you can use its controls insead of the remote, but digital radio listeners are at the mercy of Pure’s not-great clicker.

The Pure Contour 100Di is a DAB+ digital radio, FM radio, and iPod/iPhone/iPad-compliant audio dock, and it can also play audio from an external device using its auxiliary 3.5mm input.

With two 3in speakers and a bass port inside a sturdy body, this digital radio can produce some good sound. It’s still distinctly miniature — you’re not going to get deep bass or particularly rich mid-tones — but for its size the Contour 100Di is able to produce pleasant-sounding music and warm audio. 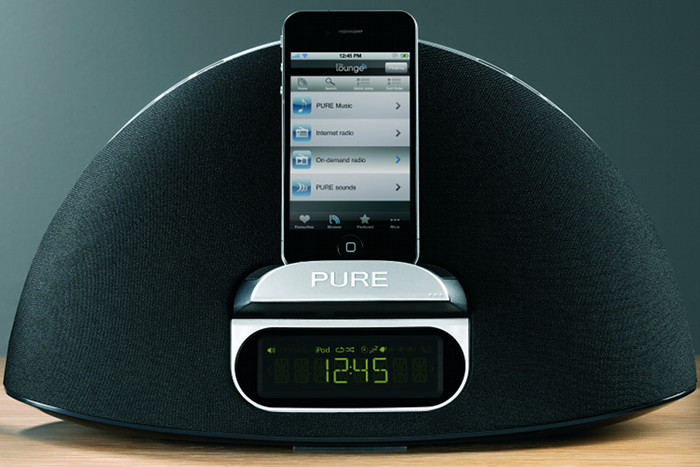 The audio that the Pure Contour 100Di produces from its stereo speakers is clean, without any distortion at low to moderate volume levels. At 20W RMS the Contour 100Di has enough power to handle small-to-moderate room sizes, although larger rooms leave it running out of puff.

For the $249 asking price of the Pure Contour 100Di, you get a well-designed and well-built digital radio with the versatility of an iPod dock. The remote control isn’t great but the system is otherwise well executed.