10 simultaneous connections is double what most VPNs offer. 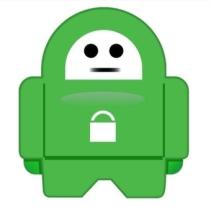 Private Internet Access has an excellent price and a good amount of extra features beyond just connecting to a chosen location. It also has a good number of country locations, a tonne of servers, and 10 simultaneous connections, which is double what many other services offer.

Private Internet Access (PIA) has been a favorite third-party VPN for many users thanks to its excellent pricing and good privacy promises. The company has changed hands since last we reviewed it and is now owned by Kape Technologies. So is it the same service that we've been using for the past few years? Let's dive in and have a look. 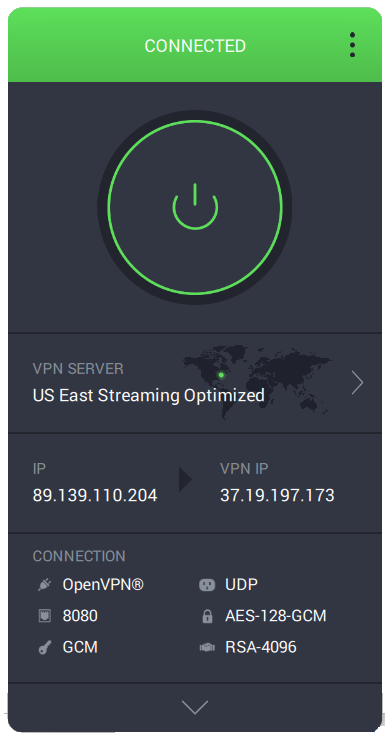 When you first open PIA it looks the same as we've seen since the company overhauled its app in 2019. You get a simple panel in the lower-right corner of your screen. This panel is fixed to that location and cannot be moved. That's not a choice I particularly like, as it feels too constrained to me, but this one is not too bad since it's pretty well organized and the window is large enough.

There's a big on/off button at the top and below that is an indicator for your chosen location—clicking it takes you to a different screen where you can choose from among PIA's various country options. If there are multiple location options in a given country there's a downward-facing arrow to the left of the country name displaying all the options. You can make the list more compact by closing those multiple options.

Each country location has its ping time right next to it in milliseconds and there's a heart icon for marking specific locations as favorites.

Overall, this is a nice design, and PIA organizes this list in two different ways: latency or name. That makes it much easier for people who are only interested in speed versus those who want a specific country. Last time around the app only organized results by latency, which resulted in some bonkers navigation when looking for a specific country.

Once you're connected, the app's last panel displays your actual IP address and the VPN address you're using. This is only the compact view, however. If you click the downward-facing arrow at the bottom you see a ton of extra modules including a quick-connect area with country options such as France, Germany, the U.S., and the UK. There are also tiles for bandwidth usage, a performance graph, data encryption and handshake settings being used, and basic settings control. Click the bookmark icon on any of these and they join the compact view—making it less compact. You can add or remove any of these options as you see fit.

PIA has added quite a few extra features since we last looked, including split tunneling, multi-hop options, and dedicated IP addresses. It also has an automation feature where you can set up rules such as automatically connecting to the VPN if you're on an open Wi-Fi server. It would be nice to see this automation feature extend to be a little more robust, such as adding the option to choose a specific location. Speaking of which, PIA has increased its country count significantly since last we looked, from 33 to 78; however, 35 of those are virtual server locations where the physical hardware is not in the country it claims to be. These locations are usually problem spots like Saudi Arabia and China, where getting actual servers up and running would be problematic. You can read more about these geo-located regions on PIA's website.

As before, PIA includes an internet kill switch, and an all-in-one ad tracker and malware blocker that's off by default. You can choose between OpenVPN and WireGuard connections, as well as easily change your options for data encryption and handshake for OpenVPN. The default for data encryption on OpenVPN is AES-128 (GCM), but you can pick AES-256 (GCM or CBC) if you prefer. There are no choices for WireGuard as all the encryption and authentication options are pretty well standardized under one setup.

PIA has some great speeds. In our tests, the service maintained 41 percent of the base speed across five locations. Speeds in the UK and Germany were particularly fast, maintaining 66 percent and 58 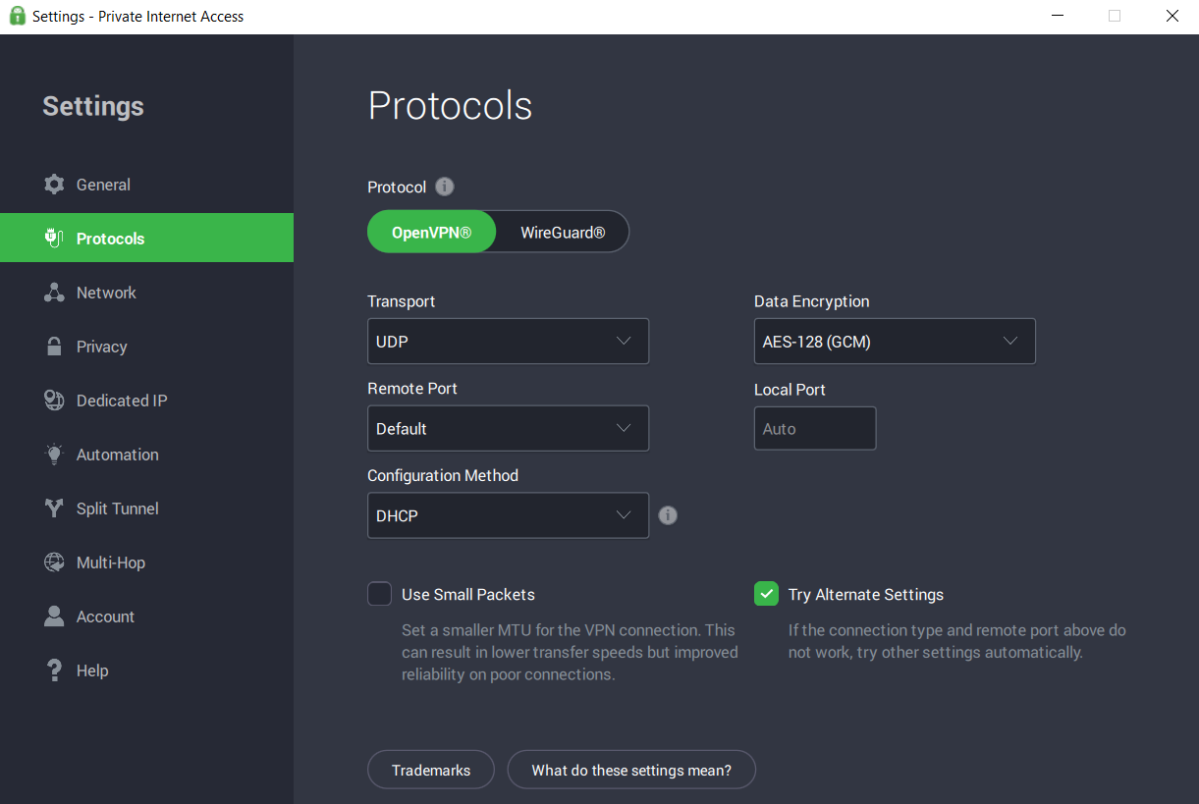 PIA has some great speeds. In our tests using the default OpenVPN options, the service maintained 36.95 percent of the base speed across five locations and multiple testing speeds. That's a slip from the 41 percent overall speed we saw last time, but PIA is still fast enough to be in the top 10 overall in our speed tests. Speeds in the UK and Germany were particularly fast, and Australia was respectable, consistently hitting around 15 Mbps. All speeds were in the double digits, meaning they should all be fine for streaming and other common uses.

PIA is owned and operated by Kape Technologies, a company based in the U.K. with offices in Israel. Kape was formerly known as Crossrider, and at the time was a platform that developers used to build ad injection capabilities into their software. These days it's focusing not on ads but on user security software such as VPNs and antivirus. Kape's CEO is Ido Erlichman, and it's owned by Teddy Sagi. Kape has been going on a VPN buying spree of late picking up ExpressVPN, and it also owns CyberGhost and ZenMate VPN, as well as Mac antivirus firm Intego.

A lot has been made about the background of one of the co-founders of Crossrider who was a member of Unit 8200, an elite intelligence unit within the Israel Defense Forces. The suggestion being possible connections between the company and Israeli intelligence circles. While it's difficult to verify such a claim, I can tell you (as someone based in Israel) that Unit 8200 acts as a de facto talent pipeline for Israel's startup industry. It would be pretty difficult to find an Israeli startup, established company, or any major foreign company with offices in Israel that didn't have former 8200 members. It's as common a pipeline in Israel as universities like Berkley or Stanford are to Silicon Valley. 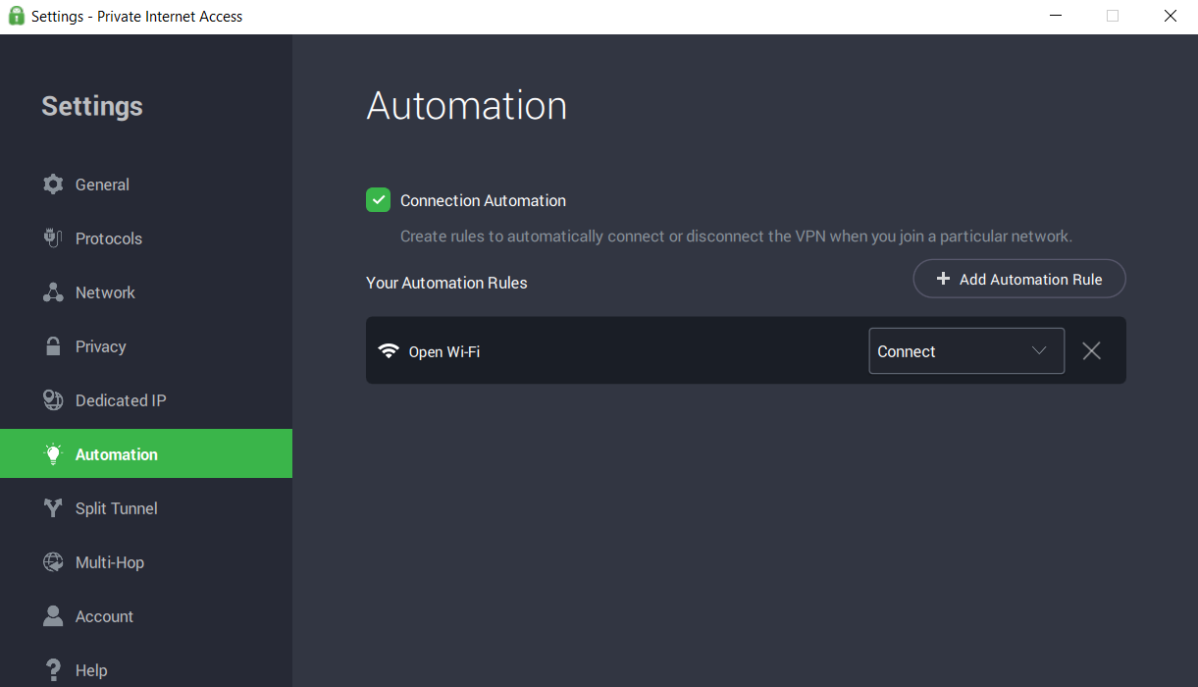 The larger concerns with Kape is the pivot from ad technology to personal security and privacy given that the two business sectors most definitely do not match. One is about siphoning user data, while the other is about protecting it from being siphoned. Whether you trust Kape is up to your own judgement, but if you're concerned, you can read more about it in the Forbes article above, as well as this Restore Privacy article.

I asked Kape what it has to say about the various allegations against it, and a company spokesperson responded, Crossrider was a widely used and immensely popular development platform for cross-compatible browser extensions that a very small subset of users co-opted with adware. Crossrider had nothing to do with the adware, actively fought against it…and ultimately shut down their business because it became impossible to curb malicious use of the platform…Crossrider's entire C-suite and leadership left the company in 2015…Kape, simply put, is a completely different company with a completely different focus.

PIA's privacy policy focuses primarily on the website, and it reserves only one sentence for the VPN itself, which reads, The above-mentioned Personal Data is not, at any point, associated with any kind of activity done by the user inside the Private Internet Access VPN which is NOT recorded, logged or stored at all. There is also a lot of copy on the website about how it doesn't log user data. I asked the company if the policy is still to send all logs to /dev/null, and the company confirmed that it was. In fact, all PIA servers run in RAM only (quite a common feature in VPNs these days), and all services related to the VPN are inside Docker containers with Docker's logging drivers disabled.

When you sign up for PIA, it asks for your email address, but you may have to provide more information depending on your payment method. PIA accepts a good amount of payment options including PayPal, credit cards, Amazon Pay, and a wide variety of cryptocurrencies such as Bitcoin, Bitcoin Cash, Ethereum, and Litecoin—there's also an option to use Bitpay instead of direct wallet transfers.

PIA is a very good VPN service, and it is one of the lowest-priced options out there that delivers a high level of service. You can find services that require less information, and there are faster VPNs out there, but the combination of solid speeds, a good app, and a great price make PIA a good service.

*Private Internet Access currently uses virtual location servers where one server purports to be based in one country but is actually based in another. This is a common strategy for hard to support countries like China, Russia, and others.