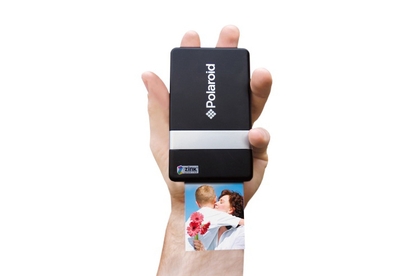 The Polaroid PoGo's appeal lies in its mobility and its near-instantaneous picture production. The price is steep for what amounts to a one-trick gimmick printer. But that doesn't detract from the silly fun people can have by printing pictures on the go. Teens and tweens, in particular, will love this feature; and casual users and business people (for example, real-estate agents who want to print pics of specific rooms for clients without delay) may appreciate PoGo's portability.

The camera world may have gone digital, but the name Polaroid remains synonymous with instant photo prints. So it's not surprising that Polaroid has introduced the Polaroid PoGo portable printer.

The concept underlying the Polaroid PoGo doesn't differ much from that behind the original Polaroid instant camera — except that this time the printer is a separate peripheral from the camera itself, and you don't have to shake the output to make the image appear.

This Polaroid PoGo printer is the first to use Zink, the zero-ink technology pioneered by Polaroid (Polaroid's parent company has since spun off Zink into a separate subsidiary).

The PoGo's thermal print head activates the 100 billion dye crystals embedded in Polaroid's new proprietary, glossy photo paper (peel away the back and your photo becomes a sticker). Sheets of the 2x3in media are thinner than the old Polaroid print paper and contain three layers of primary colours suspended in the paper itself.

The small Polaroid PoGo printer fits in your palm, although its power pack is almost the same size and weight, and the included rechargeable battery handles only about 15 to 20 prints on a single charge.

Holding up to 10 pieces of paper at a time, the Polaroid PoGo's paper conveniently comes in packages of 10 sheets. Loading paper is a simple matter of sliding open the unit, inserting the paper into its holder, and closing it up.

Printing was equally easy. Like more-traditional inkjet-based snapshot printers, the Polaroid PoGo is designed to print snapshots from a digital camera or a cameraphone.

The Polaroid PoGo connects to mobile phones via Bluetooth, and Polaroid says that it works with 80 per cent of the mobile phone models on the market that are equipped with Bluetooth and a camera — though the Apple iPhone is not among them. The Polaroid PoGo also connects to PictBridge-enabled cameras via USB. You can connect it to your PC, but an application designed to optimise images for printing from your desktop won't be available until the fall.

We had no trouble pairing the Polaroid PoGo from a Palm Treo 680 phone. We entered the Bluetooth code, the phone found the printer, and we could begin sending images to the printer via Bluetooth.

The Polaroid PoGo printer took less than a minute to print the 640x480 image we had snapped with the Treo's camera, but it took several minutes to print images taken with an 8Mp digital camera and stored on the Treo's SD Card.

Thanks to the Zink design, we could print while holding the Polaroid PoGo printer at an angle, but when we did so, we had to pay attention to where and how the image came out of the printer to avoid crushing or bending the paper.

We also found that the unit ran fairly hot; after the Polaroid PoGo printed eight photos in quick succession, its surface was toasty.

The output came out dry to the touch, so we didn't have to worry about smearing. The printer's software automatically scaled images to fit the paper's 2x3in area; as a result, the bottom or top of an image sometimes got chopped off — and there's no way to control which part of the image appears in the final print.

As was the case with the original Polaroid images, obtaining instant gratification in the form of PoGo prints necessitates some compromises — though fewer than you might expect. Output quality directly correlates to the quality of the captured image: our Treo's 640-by-480-resolution image was flat, with little contrast and dull colours; moreover, it wasn't sharp and we noticed banding in the landscape's blue sky.

A higher-resolution digital SLR image of a gymnast flipping through the air, however, printed surprisingly well, complete with skin gradations and detail in the muscles and flying ponytail.