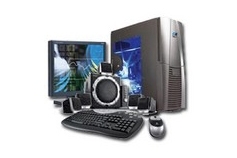 If you're after speed then there is no looking past this machine. Its build quality and supplied peripherals are top-class.

High-end PCs and entry-level workstations don't get much better than this. It has all the fancy technical wizardry you would expect a very fast machine to have, yet it also comes with peripherals that make it an absolute joy to use. The machine is built inside an Antec Plus View II case, and its windowed side-panel offers a glimpse at all the powerful components it cocoons.

This power comes primarily from AMD's current high-end juggernaut - the Athlon 64 FX-60 processor, which sits on an ASUS A8N32-SLI motherboard alongside 2GB of RAM. Since it is a dual-core CPU, the 2.6GHz FX-60 has improved multi-tasking capabilities over previous FX processors.

The machine completed the multi-tasking test in World Bench 5, which encompasses Office, 3-D and multimedia applications, in only 364sec and its overall score was 137 - a Test Centre record.

Contributing to the high score was the RAID 0 array in this machine, which features two 10,000rpm 150GB Western Digital Raptor drives.

For gaming and entertainment, the machine ships with a 512MB MSI NX7800GTX graphics adapter and a Logitech X-530 sound system. The G15 gaming keyboard has backlit keys, perfect for night-time, while the G7 cordless mouse is laser-guided and extremely precise.

This system runs optimally: there are four case fans installed to cool the hard drives and the graphics card and all the cables have been tied neatly out of the way. Cable management is further enhanced by the use of a 600-watt modular SilverStone power supply.