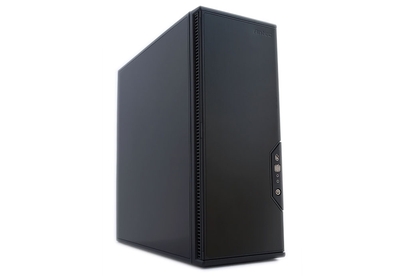 The Plus Corp Atlas is a workhorse for gaming and will handle most other tasks with relative ease. PlusCorp has used some trustworthy components, which should keep this system running well into the future. Whether you're upgrading from a very low end system, or just like having the best, you're going to have fun with this computer.

Plus Corporation has a habit of sending us PCs laden with the latest, flashiest and most powerful hardware on the market and the Plus Corp Atlas AM2 5200 PC is no different.

Though AMD announced it will be releasing a number of new processors from December 2006 onwards, at the time of testing the 2.6GHz AMD Athlon 64 X2 Dual Core CPU installed in this monster of a machine was at the top of the ladder. We ran World Bench 5 in which it scored 129. While this is a good score, it was certainly helped by the 2GB of 800MHz Geil RAM. To accommodate the CPU, Plus Corporation (PlusCorp) has used an Asus Crosshair motherboard (see PC World November 2006 for a full review), which is aimed at enthusiast PC users. A couple of handy features will please those who tend to have their heads inside their case as much as in front of the screen.

Firstly, a red LED-lit button on the printed circuit board (PCB) allows you to quickly and easily reset the BIOS without playing with the jumpers. Secondly, if you're having problems during system boot, an LCD on the rear panel gives you slightly more detailed text messages that you would otherwise have to decipher from the system beeps. It's not ideal but is a little more informative than usual. There's also a power button directly on the PCB (also lit by a red LED) that allows you to power the system on or off without having to connect the case power button to the board. This is handy if you are testing new hardware. Another button on the rear panel turns on a selection of blue LEDs that indicate key points on the PCB for upgrading, such as IDE or SATA ports and power connectors.

On top of these nifty power-user features, the Asus board also comes with two e-SATA ports on the rear. There are currently very few e-SATA external cases, but the trend is growing and the ability to connect an external SATA hard drive to your PC at speeds that theoretically exceed four times that of USB 2.0 will tempt many people with heavy storage requirements.

The Inno3D GeForce 8800 GTX used in the Atlas is the latest and by far the hottest graphics card to hit the world of gaming. Not only does it perform incredibly, scoring 9303 in 3D Mark 2006, but the dramatic changes in the GPU architecture and the addition of support for Microsoft's DirectX 10 application programming interface (API) that will ship with Windows Vista means that this card will keep your games running smoothly and looking pretty for some time to come. There's no sound card, only the onboard audio controller, but analogue and digital audio connections are available on the rear panel.

The system comes with two 7200RPM 500GB Western Digital Caviar hard drives, which are configured as a single terabyte in a RAID 0 array by default. However our review sample was not set up for raid 0 and therefore our benchmarks will reflect slightly slower results to those you may see on the final product. We copied 4.12GB of varying file sizes within the primary drive, which it completed in 197 seconds; a fairly impressive result. Aside from the speed, having a terabyte of space at your fingertips will be more than enough for most people to store their music, movies and of course program files.

The Antec P180B case is made from steel and therefore is reasonable heavy, but sturdy, and it comes in a sleek, all-black design. The main front panel swings open and sits flush against the side when fully extended revealing the front drive bays including a Dual Layer DVD-RW optical drive and a 3.5in floppy drive. The power button, some USB ports, a FireWire port and some audio ports are accessible while the panel is closed for convenience. The side panel can be removed via two thumb screws and from here all the components are reasonably accessible. The 650 Watt CoolerMaster power supply is located in its own chamber at the bottom-rear of the case and the two hard drives are mounted in a removable chamber at the front. A total of four extra 3.5in hard drive bays are available, along with two spare 3.5in floppy drive bays and four extra 5.25in bays. A 120mm fan blows air directly over the hard drives to keep them cool, and there are several fan mounts if you wish to add extra cooling..

The cable management is a little hectic, mainly because of the chamber separation in the case. The PlusCorp team has dealt with the problem using a few cable ties, but if you're planning to use those buttons on the motherboard you're going to have a hard time getting to them unless you do some re-arranging. Two more 120mm fans, one on the top of the case and one at the top-rear should keep the CPU fairly cool. The case dampens much of the noise but it's definitely not silent.