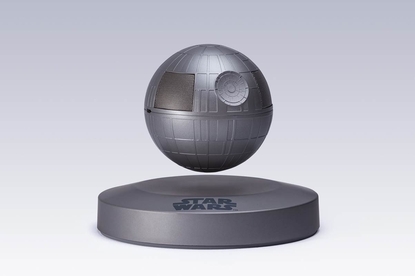 There are much better-quality Bluetooth speakers out there (cheaper too), but they aren't all levitating Death Stars are they?

So we may have got a bit excited at the announcement of this device from Plox. But it’s quite natural to regress to a small child when something like this comes along. Yes it’s a levitating Death Star speaker and yes you (and/or your kids) will probably want one. Yes Christmas is coming and yes, it’s $250. That’s not cheap. So is it worth buying?

Firstly, if you’re buying this for yourself or especially a child, charge it up before wrapping it up. The base needs to be plugged in to work and when it is it becomes a very strong magnet. If you, like most other people, then try and make the Death Star levitate above the base, even after a cursory glance at the instructions, you’ll end up in a hilariously-frustrating scenario just like this…

But once it’s up and running you have a levitating, rotating Death Star! Just search with Bluetooth on your phone, choose, Death Star and you’re away. Note, there’s no security here, anyone else can connect and play audio too. The battery lasts for two hours.

There’s only one, 5-Watt speaker in there so don’t expect the greatest audio quality. It doesn’t get very loud – but will fill up a bedroom with modest-quality audio. Treble appears without distortion and bass is almost impressive considering the size. But there’s little punch or rounded audio quality here.

Look, it’s a levitating, rotating Death Star speaker and, to some extent, it does what it says on the tin. At $250 it’s not cheap. Furthermore, Amazon and eBay have similar models – some of which light up and cost less, but none of them appear to have proper Australian distribution and/or be officially-licensed products.

You can buy a UE Boom 2 which sounds dramatically better, is ruggedized and waterproof for around $70 less so if you need a portable Bluetooth speaker and are any kind of audiophile get that... But then you won’t have a levitating, rotating Death Star speaker will you?