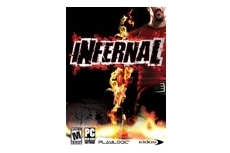 Infernal is a solid and entertaining action game that had us playing for hours on end. Despite there not being any star power, we can't wait to see what the developers of Infernal will be creating next.

Infernal has been available in Europe for a while, but it arrived in our offices with such little fanfare that we initially mistook it for a budget title from some upstart publisher.

Curiosity got the better of us, and we booted it up, thinking we would play it for just a few minutes. The next thing we knew, the workday was almost.

Good, bad, i'm the guy with the gun

First things first: Infernal is not perfect. In fact, it does certain things very poorly. The voice acting, for instance, is pretty bad, in that B-movie sort of way, and the storyline -- what little we could understand of it -- is rather poor. The main character Lennox is an agent who used to work for the forces of good, but he's predictably betrayed and instead finds himself working for the forces of evil. He is then caught up in a twisted plot where his best friend might be his worst enemy and -- okay, you get the picture.

The strange thing is, for all its faults, the game is a blast to play. The traditional third-person "shoot anything that moves" gameplay is nothing new but it's solidly done. You'll expend a ton of bullets and off a ton of foes, most of who offer up just enough of a challenge for you to feel like a true badass. You also acquire some pretty awesome powers that augment your arsenal nicely, including the ability to charge up your bullets for extra damage, teleport briefly through obstacles and -- this is the coolest ability -- the power to shift and move objects at will. Think of Half-Life 2's gravity gun, but not as intuitive, and you'll be halfway there.

On top of all this, everything in the game looks damn good. Whenever we would boot Infernal up, we had co-workers stopping by our desk to exclaim, "What game is that? It looks awesome." Granted, we were playing with all the settings maxed, but even with modest specs, you should be able to squeeze out some awesome visuals.

As mentioned earlier, the game does have a few rough spots. The terrible voice acting and generic story aside, we also noticed that the game's cover system is pretty much useless: you have to lean out to get a targeting reticule and the enemy's aim is so good that they'll tear you apart the instant you expose the hairs on your chinny-chin-chin. Also, some of the boss fights are annoyingly difficult and will require multiple attempts just to knock off. Oh, and one more thing: despite the fact that he's a badass killing machine, Lennox is incredibly susceptible to falls. Drop from any height higher than a few feet and it's an instant death.

And yet, these issues can't disguise the fact that Infernal is a solid and entertaining action game that deserves more attention than it's probably going to get. We hope it isn't unfairly penalised for its lack of star power because, honestly, we can't wait to see what Metropolis will do for an encore. With Infernal, they've proven that they are a developer worth watching.