Fans of earhook-free headsets will appreciate the Discovery 975, which offers great-sounding calls at both ends of the line 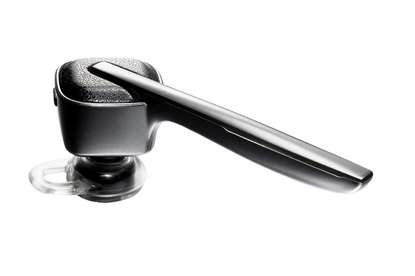 If you can absorb the cost -- or if your employer is willing to do so -- the Plantronics Discovery 975 delivers impressive incoming-audio quality, mostly great outgoing-call quality, a couple of charging options, and a rock-solid carrying case.

I don't know about you, but I get particularly grumpy if I have to concentrate when I put on a Bluetooth headset. I have long hair, and I wear eyeglasses--two things that can get in the way of earhook-oriented headsets. That's why I appreciate headsets like the US$130 Plantronics Discovery 975, which is hook-free and truly plug-and-play.

Like its predecessor, the US$130 Discovery 925, the Discovery 975 requires no futzing: With one hand, you can place the headset in your ear, point the microphone boom down toward your mouth, and tap the call button to get rolling. Plantronics provides small, medium, and large ear-gel tips, so you have a good shot at obtaining a comfortable and secure fit.

Using the smallest earpiece cover, I arrived at a remarkably comfy and snug fit. The Discovery felt light--almost breezy--and stable, too. At 2.7 inches, the boom is long, but it did not feel intrusive.

As I bopped around from my desk to my car to the coffee place (and back again), the headset did not budge. I'd like to say that I jog regularly (ha!), but purely for testing purposes, when I did make a rather pathetic attempt at running energetically, I was impressed with how the unit stayed in place.

Overall, the call quality was impressive, too. Incoming calls sounded superclear; and at the other end, my voice generally sounded crisp and natural, with some calls sounding better than handset-quality. The Discovery's handling of background noise was somewhat disappointing, though. Low-level or ambient noise would be reduced, but more-elevated levels of noise like chatter or tunes came to the fore when I stopped talking--and this proved to be distracting. Music, for instance, sounded as if it were coming from inside a washing machine.

Plantronics touts the product's improved handling of windy environments. My test calls sounded pretty good in a moderately windy scenario. The parties on the other end could hear the swirling sound of fast-moving air, but my voice did not sound distorted.

The Discovery 975 sports just two buttons: the main call button, which sits near the edge of your ear canal, and the volume button, which is located on the side. Both buttons lack well-defined feedback, though. Plus, the volume button does not jut out much, and I found it difficult to press with a finger. I often had to resort to using my thumbnail, which is hardly ideal.

The rechargeable carrying case proved to be a great asset. For starters, the case is a perfect way to store your headset--it's specially designed to accommodate the Discovery's elongated shape--and if the case's battery is charged, you can use the case to recharge the headset. Thanks to this feature, you don't have to bring the AC charger along if you know, for instance, that you won't have access to a power outlet for an hour or two on a given day.

And compared with the case for the Discovery 925, the Discovery 975's case offers some great enhancements. The new case lets you house the headset in an easier manner--it's more obvious how to insert the headset, and you'll find a tiny lever that you can push to eject the headset. Also new: The LCD screen on the exterior indicates how much of a charge you have left on the headset and on the case--handy info to have if you're planning to gab on a bunch of conference calls for a few hours. On top of that, charging the headset in the case can give you up to 15 hours of talk time.