You won’t experience much bass, but the Plantronics BackBeat Go headphones are certainly convenient While they may not impress when it comes to top-end audio quality, the Plantronics BackBeat Go wireless in-ear headphones offer plenty of convenience. The sound produced isn't the loudest and bass lacks punch but the real impressive feature here is the lack of messy cables and the ease of use.

The Plantronics BackBeat Go wireless in-ear headphones are a convenient and tangle-free option ideal for smartphone users. If you're willing to fork out just under $120 and don’t mind a lack of bass, the BackBeat Go headphones should impress you.

A wearable and functional design

When you first unbox the Plantronics BackBeat Go headphones, you'll notice a set of slightly bulky-looking earphones with a simple and sleek design. The size becomes evident once worn, especially when compared to standard in-ear headphones like Apple’s default iPhone earbuds. Compared to traditional headphones, the Plantronics BackBeat Go stick out quite a bit more, and the weight, although not ‘heavy’ per se, is definitely noticeable.

The Plantronics BackBeat Go headphones are, in general, a clumsy fit, despite the fact that there are three different-sized silicon tips included. Although they may initially sit in your ear, they have the tendency to fall out when moving your head about, eating, or speaking. This experience varies, of course, as everyone has a different ear shape and size. Plantronics rather successfully addresses this issue by including a pair of ‘stabilisers’ — small silicon add-ons which are attached to the earpieces, behind the silicon tips. These sit inside your ear, following its contours, and effectively stop the headphones from shifting. 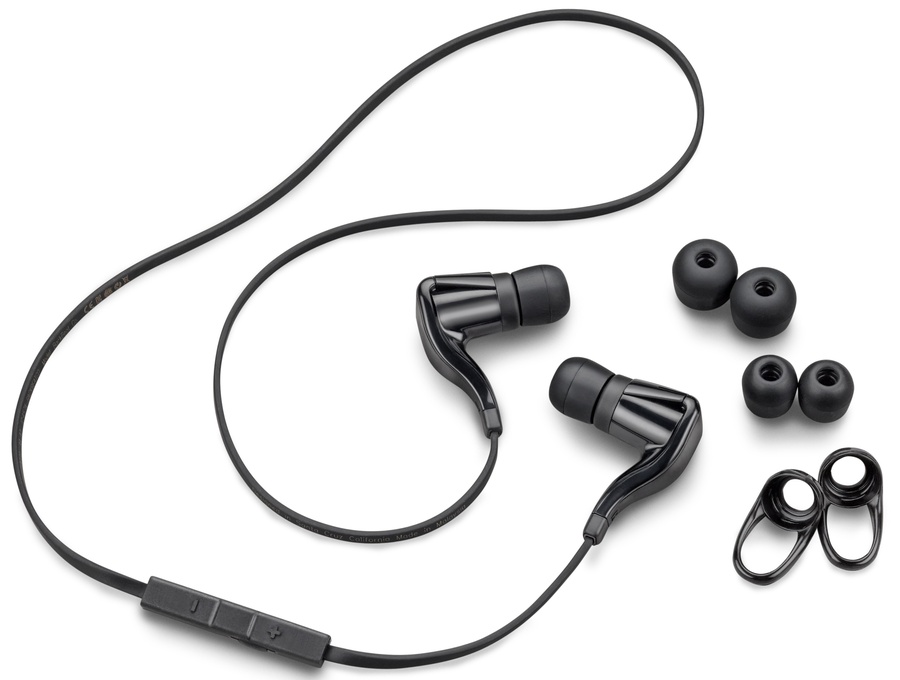 Plantronics includes multiple sized tips in the sales package, along with a pair of 'stabilisers'.

The Plantronics BackBeat Go headphones are currently only available in a plain black colour, although Plantronics plans to sell other colour variations in Australia in the near future. This will include a white model targeted at white smartphones like the iPhone and the HTC One X, for example.

Easy to use, but no multipoint Bluetooth

The BackBeat Go's wire, which ties the two earpieces together and houses the control panel, is about 56cm long. This is a good length and caters for heads of all sizes, allowing the freedom to move your head about without tugging. Apart from ensuring you don’t lose one earpiece, the wire allows you to dangle the Plantronics BackBeat Go from your neck when not in use. The soft-feeling, rubber material keeps the headphones from sliding off to one side of your neck.

The Plantronics BackBeat Go control panel is located below the right earpiece, and has four buttons: volume up (+) and down (-), a centre button, and an on/off/pairing button on the side. The functions differ from what most people would be used to, but it's easy to grasp. As an example, a two-second press on the + or – button will initiate a track change.

Pairing the Plantronics BackBeat Go with your smartphone (or tablet) is straight forward. Simply hold down the side button until the unit enters pairing mode (denoted by a red LED flash), search for the headphones in your devices Bluetooth menu and connect. Annoyingly, the BackBeat Go headphones lack multi-point Bluetooth, so you can only pair to one device at a time. If, like us, you use the headphones with a smartphone and a tablet, you'll need to pair them again each time you want to swap devices. 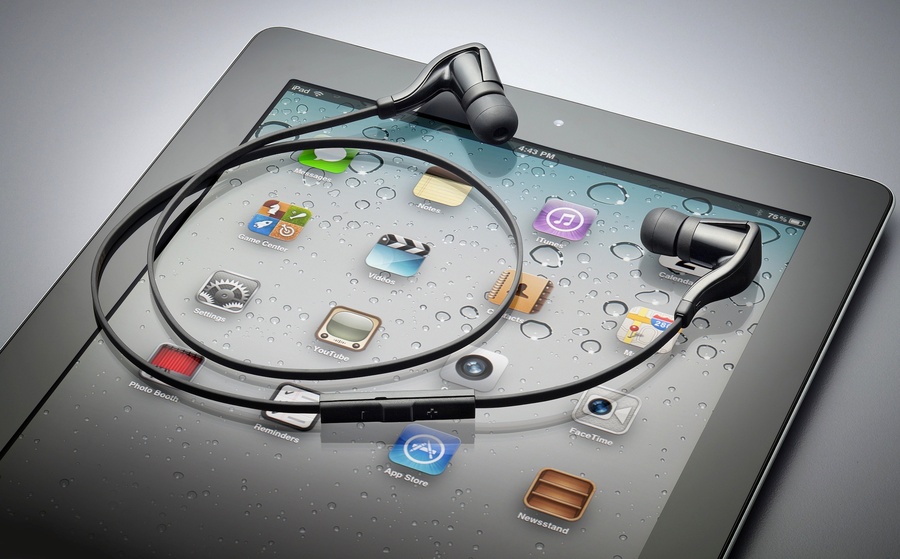 The BackBeat Go headphones will work with any Bluetooth device but, annoyingly, there's no multipoint Bluetooth.

Decent sound, but lacking in bass

As a device that is intended to handle calls and cater for music listening, the Plantronics BackBeat Go headphones do a satisfactory job. At the same time, they lack in both volume and bass, so they're not ideal for audiophiles.

When compared to Apple's standard iPhone headphones, the maximum volume output of the Plantronics BackBeat Go is significantly lower. This is not to say that they are quiet. In most scenarios volume is adequate, but as a train commuter the screech of the train on the tracks has the ability to drown out music, as do highly-populated train stations during peak hours. Using the correct silicon tip helps, as does the way you wear them. With the correct fit you should notice minor noise-cancellation.

For music listening, the quality of the Plantronics BackBeat Go headphones will be entirely contextual. While they can handle the vocals and softer instruments of acoustic act, City and Colour, alongside the high ambient demands of 8-bit group, Triforce, they can't cater for the deeper and heavier instrumental needs of electro DJs or metal bands. The weak bass means that the electro 'bounce' sound intended by NatNoiz was not translated through the headphones, nor was the heavy instrumental work of band, Northlane; the bass guitar sounds flat, and the drums were not delivered as the deep impact thuds intended. This heavy kick was missing from all similar forms of music.

For phone calls, the Plantronics BackBeat Go produces ideal sound. The headphones deliver crisp incoming sound, while the built-in microphone works well for outgoing voice. The microphone allows you speak at a normal volume despite its positioning, so there's no need to yell or hold the control panel closer to your mouth during calls. 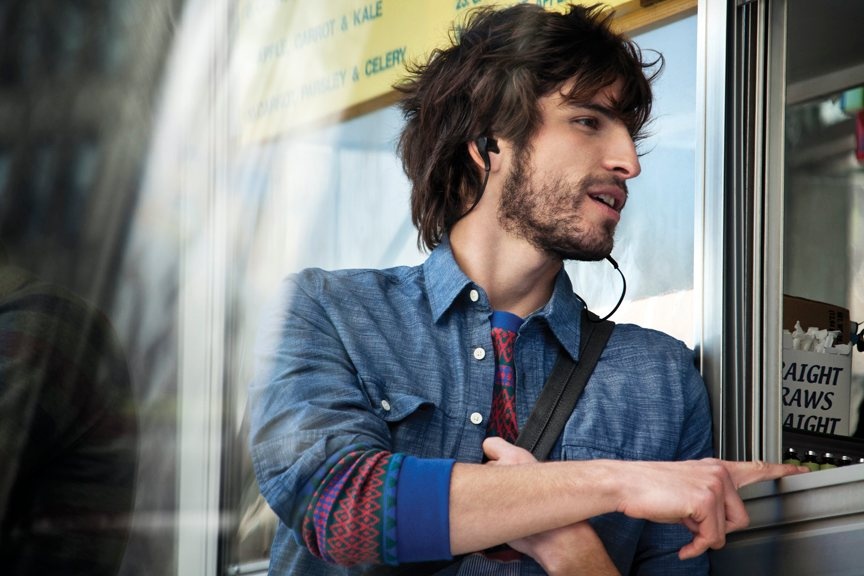 The design of the BackBeat Go headphones means they sit comfortably around your neck.

The Plantronics BackBeat Go headphones last for between three and 3.5 hours before the battery needs to be recharged. This time was split between three one-hour commutes to and from the office. The headphones are charged via a USB cable which can be plugged into either a PC or power outlet using the included AC adapter. On the headphones end, the micro-USB port is hidden behind the right earpiece by a rubber flap. Plantronics officially recommends a 2.5-hour charge time, though we found that around 1.5 hours can be enough to fully charge them.

When paired with an iPhone, the BackBeat Go's battery status is presented on-screen beside the smartphone's battery. The image shows you when the battery is on 100 per cent, 50 per cent and 20 per cent, at which point it turns red and the headphones make a sound to remind you to charge them.