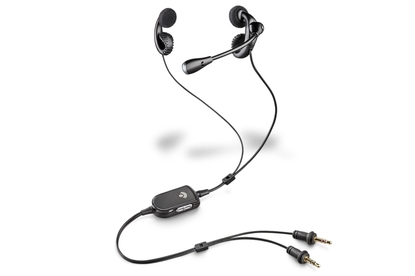 Compact, lightweight and functional, Plantronics' Audio 450 is a convenient headset for portable applications.

The Audio 450 features what Plantronics calls a "Flex Grip" design, where the earbuds are mounted on a rubber clip that fits around the bottom of the ear, and moulds itself to the ear lobe. A microphone is attached to the left earpiece via a 180 degree swivel boom. This allows the microphone to be tucked conveniently under and away when not in use.

Each earpiece is surprisingly light, but while the grip feels comfortable and secure even after long periods of use, it does take a little getting used to. The lobe-hugging design could also be problematic for users who wear earrings, as it doesn't leave much room for jewellery.

Sound is delivered in clear stereo, and the sealed backs of the earbuds cut out background noise effectively. As is the case with many earbud designs though, frequencies at the upper and lower ends of the spectrum are slightly dampened, producing somewhat of a muted effect. This may encourage users to use the headset at damagingly high volumes.A thumb-sized, in-line remote houses both volume dial and a switch to mute the microphone. This provides good control over output audio, and the noise-cancelling microphone mutes cleanly.

The headset connects to an input/output device via a standard 3.5mm analog jack plug, which is handy, as this means it can be plugged into most audio devices. The 1.9 metre cable length should be sufficient for notebook users, but it might pose a problem for PC users with computers tucked far away under a desk.

All in all, Plantronics' Audio 450 is a decent portable headset for notebooks, and the asking price is competitive. However, users who aren't constrained by space may prefer to spend more money on larger headsets that will better reproduce the entire spectrum of frequencies.