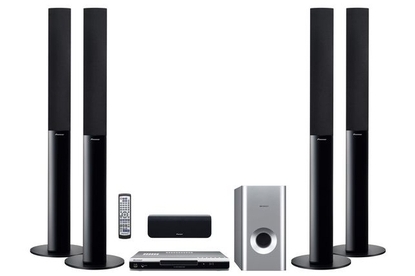 For those looking to enter the world of home theatre on a budget, you can't go too far wrong with the HTZ252DVD.

The HTZ252DVD is a DVD player and 5.1 speaker package containing four satellite speakers, a small centre speaker and a subwoofer. For a system at this price point Pioneer has packed a lot of features into the HTZ252, which makes it a great starting point for anyone wanting to enter the realm of home theatre.

The four main speakers look great and one could easily mistake them for a much more expensive set, however the plastic centre speaker and subwoofer look slightly cheap in comparison, somewhat ruining the aesthetic. Setting up this 5.1 system took quite a bit longer than usual as the speakers had to be screwed to their bases, also requiring us to hunt down a Philips head screwdriver. Once the bases were attached, connecting the speakers to the DVD player was a simple task as all wiring and connections are colour coded.

The sound quality was good in our movie testing, with the gamut of sounds and effects of The Matrix giving the speakers a run through their paces. Explosions and gun fire sounded good with the sub holding its own and providing plenty of deep rumbles when required. The lobby scene in particular is a great test for the directional qualities of speakers, and in this case the HTZ252DVD performed well, although not spectacularly. The subwoofer sounded quite dull when reproducing the thumping bass from the Propellerheads track in this scene, but made up for it in the conveyance of explosions later on.

Music playback via the CD/DVD player and our USB device was again good, suiting most styles of music fairly well. There was a slight weakness in the higher registers, but this did not detract greatly from the overall sound quality. The sub performed surprisingly well on our tests, only struggling sometimes with the softer, more subtle bass lines of slower funk and jazz. Dance, hip-hop and rock music were the noticeable standouts in performance.

The DVD player only has basic connections including single composite, component and S-video outputs, as well as antenna ports and a USB input for viewing media files. Pioneer has excluded the HDMI output that can be found on the UK model, which is a disappointment considering the increasing proliferation of HDMI compatible components on the Australian market.

Playing back pictures and music via the DVD player or USB input could have benefited from a slightly better menu display as the current interface is very basic, but nonetheless it is easy to use. The HTZ252DVD is able to play a host of file types including JPEG, WMA, MP3, MPEG-4 AAC and DivX files. There is also a radio function with 30 presets.

Overall, this is a good entry level home theatre offering from Pioneer. Although it may not be truly outstanding in any one area, it performs all functions well, making it great value for money.