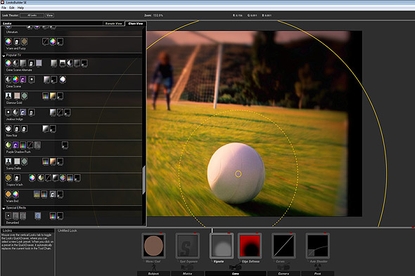 Pinnacle Studio HD 14 will require that you invest some time in learning to use the program, but the result will be professional-looking movies that you can be proud to share.

Unlike Adobe Premiere Elements, Pinnacle is more rooted in traditional video editing methods used to produce professional-quality movies. Pinnacle offers deeper features for import, customisation, and export that will likely make it significantly more difficult for the novice to learn and use, but its free online tutorials are excellent at getting you jump-started.

While the partially redesigned interface is cleaner, Pinnacle Studio HD 14 still has the three tab steps found in earlier versions, which are slightly renamed to Import, Edit, and Make Movie.

The Edit window has the feeling of a more professional program, thanks in large part to a new gray, neutral background. A more important change is that the old pages format has been replaced by an album structure with a scroll bar, which is much more efficient for finding your clips, photos, and other elements for your movie. For further assistance in navigation and helping to find assets, you can now set specific folders as Favorites within Pinnacle, and you also have direct access to Windows Explorer from within the program.

At the bottom of the Edit window is the Timeline, for mixing the various elements of your movie (you can also view your project in Storyboard format). Clicking on an icon lets you access Videos, Transitions, Montage themes, Titles, Photos and Frame Grabs, Sound Effects, and Menus. As with previous versions, simply select any asset among these categories, and drag-and-drop it into the Timeline. Pinnacle's tools for adjusting length, order, and relationship of the various objects are standard.

The new Project Bin, also found in the Edit window, is a place where you can add all the assets you may want to use in your project. It's a useful organisational tool, but it is hidden under a tiny icon over the Timeline and may be overlooked by many users.

Other additions include a basic, but long-overdue, tool that lets you copy effects from one clip in a movie project to another. Photo quality (of stills incorporated into your movies) is improved. In addition, a new Stabilize effect will ameliorate or eliminate camera shake, though even experienced users may need to do some experimentation to find just the right settings.

New DVD menus have been added. And the Montages feature - which gives you the ability to combine videos and photos into frame designs (such as an animated photo book or an overlay roll of videos and photos) - has new templates, greater flexibility with fonts, and other improved tools.

The wide range of export options (DVD, AVCHD, Blu-ray, HD-DVD, SVCD, Flash file, AVI, Windows Media, the various MPEGs, and many others) now include partial export of a project, plus presets for MP3, PlayStation 3, Wii, and Xbox, as well as a new Best Quality option for YouTube uploads. You can also create and record your project at 24 frames per second for more-professional output.