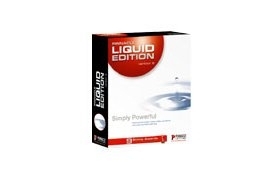 Definitely the most powerful integrated video editing package available at this price, but still a tough challenge for the newcomer

Liquid Edition 6 is Pinnacle's video editing package for the studio pro­­fessional or serious video hobby­ist. Although undeniably powerful, it's previously been criticised for poor usability but Pinnacle has taken steps to improve this situation by (finally) adding a Windows-like interface option to help ease the learning curve a little.

As far as the features are con­cerned, there are some exciting new additions to an already impressive list. The first of these is support for high-definition video (HDV) right out of the box; though you'll need a gutsy PC to even consider using this feature (2.8GHz for 720p, and dual 3GHz for 1080i HDV). Thanks to SmartEdit, standard definition content can be mixed with HDV on the timeline, as well as varying codecs and broadcast standards, while SmartRT still allows you to split the effects processing workload between your CPU and your graphics card for real-time previews.

Also new is the excellent new Multicam feature, which lets you switch between up to 16 synchronised camera sources, building on the timecode synchronisation feature of previous versions.

Collaborative workers will appreciate tools like network communication and storage, and tools like Xsend which lets you dump projects out to external applications with minimum fuss. Individual users will appreciate the task wizards and support for Pinnacle Studio projects, while both will benefit from InstantSave and background rendering - two of Liquid Edition's best features.

Admittedly, it's still a challenge to get to grips with, and the integrated DVD authoring isn't as advanced as some discrete editors, but there's nothing on the market that offers such a range of features for this kind of money.