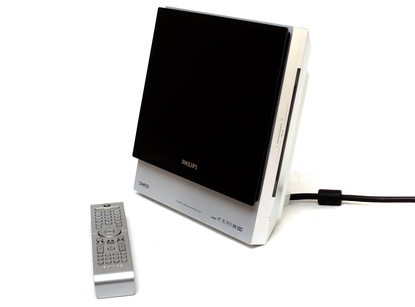 An incredibly stylish offering from Philips that also sounds great

There are an awful lot of nice things to say about Philips' HTS9800W home theatre system. This 6.1 wireless home theatre system has an air of Bang & Olufsen about it, minus the price tag. Wafer thin speakers combine with a vertically mounted DVD player to create a system that looks, and more importantly, sounds excellent. On top of this, wireless connectivity frees the rear three speakers, making tangled wires trailing across the living room a thing of the past. Just make sure you've got room for all the extra cables that are going to be cluttering up the front.

With the HTS9800W Philips really has raised the bar when it comes to affordable yet stylish home theatre. The design of the system wouldn't look out of place in a package costing many times the relatively modest asking price. The six sleek speakers are identical, each housing two small woofers and a neodymium ribbon tweeter. The four corner speakers can be wall mounted or attached to the included chrome stands, whereas the centre and rear-centre speakers come with built in stands and are placed horizontally. A plainly finished matching subwoofer completes the package.

What really sets the system off is the main DVD player, which spurns the usual boxy look and opts for a standalone vertical design. This isn't so good if you wish to place it under the television, but it looks great so there's no need to hide it away. The system is touch sensitive, with a panel of glowing blue controls along the front, and a slot-in DVD mechanism on the side. A one line LCD displays track names across the middle of the unit.

Because the system is so unusually shaped, there are limited connections on the box itself, with only an FM radio antenna and HDMI out. Everything else is connected using a junction box, which is itself connected with some fairly clunky cables. This auxiliary connection box houses component, composite and coaxial connections. There's no optical or S-video anywhere on the system. The remote is one of the few let-downs with regards to the design. Finished in plain silver, it is unintuitive to use and rather unattractive in comparison to the main system.

When it comes to connecting the speakers Philips has used some simple colour coded plugs and a proprietary connection to ensure simplicity. The front three speakers attach directly to the subwoofer, while the rear three connect to a wireless receiver that needs A/C power to operate. Once this is done everything is ready to go. Philips doesn't include an automatic calibration microphone, so it's necessary to set the levels and delay of each speaker manually. At first we found the centre speaker to be far too loud and the rear corner speakers too soft, but we were easily able to correct this.

We grew even fonder of this system after performing our audio tests, where it performed brilliantly, especially for music. Across all genres the sound was rich and involving, with deep bass and crisp audio through the higher frequencies. The Rolling Stones' Sympathy for the Devil and Outkast's GhettoMusick sounded spot on. The unit is also capable of high volumes without distortion, though is perhaps a little quiet when watching DVDs. Philips include several sound modes such as action, drama and sci-fi which equalise the sound for the appropriate kind of film and we found them quite useful in the right situations.

Using HDMI out the picture quality from the HTS9800W was very good, with the inclusion of basic brightness and contrast controls handy for fine tuning the picture. The hallucinogenic colours in Shark Boy and Lava Girl were recreated perfectly without over-saturation. Another nifty feature from Philips is the lip synch control, for when the picture and sound are not in time.

Like most home theatre systems these days the HTS9800W isn't limited to playing just DVDs or CDs. Philips has included support for Super Audio CDs (SACD) which are touted as a high-end alternative to regular CDs. Also included is support for DivX movies, JPEG photos and MP3/WMA music files. Philips has produced one of the few interfaces where access to these data files is actually intuitive, and where the system recognises multiple kinds of files on the same disc. Playback quality is good, and we were especially impressed by the unit's MP3 and WMA output, with a dedicated digital music setting giving great, lifelike sound.

Overall the HTS9800W is an impressive system. Its unusual, yet attractive, design makes it an ideal purchase for the style conscious buyer who also wants great performance and practicality to boot.