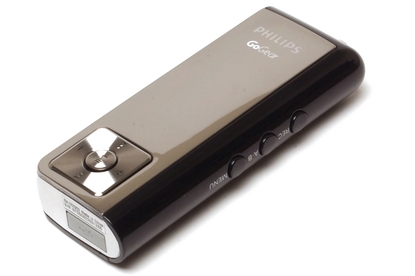 The SA1335 is a solid but not outstanding MP3 player. It offers good sound quality combined with a stylish design and a built in USB port, but the sluggish interface and slightly lofty price tag hold it back from being excellent.

Philips' last entry into the portable multimedia space, the GoGear SA1100, was a fairly competent device, but it didn't particularly impress us. Their latest effort, the 1GB GoGear SA1335, goes some way to improving on its predecessor, providing the same excellent sound quality and combining it with ease of use, an attractive design and a hidden USB port on the unit itself. It still doesn't do anything particularly special, but as a simple flash memory based MP3 player the SA1335 works quite well, although the interface did give us some issues.

One of the biggest improvements is the design. The previous unit, while not unattractive, had a triangular shape and looked quite basic. With the SA1335 Philips has opted to mimic the hidden OLED screen that Sony recently implemented on their new line up of music players. The display rests behind a semi-transparent panel on the front of the unit and is invisible unless it is turned on. When powered up, the data simply appears as if projected onto the face of the device, creating quite a funky, futuristic appearance. It does however have the downside of being virtually invisible in direct sunlight.

The rest of the body is finished in gloss black and silver and is a slim rectangular shape, which looks quite good and slips easily into your pocket. The only problem is that the front panel tends to collect a lot of finger prints, which detracts from the style a little.

The other nifty thing about the design is the retractable USB port that slides out from the back of the unit. Using a switch on the base slides the plug out, allowing you to connect the SA1335 directly into your PC, without the need for any cables. Of course it does also come with a USB cable should that be your preferred transfer method. This USB port is quite handy, as the device doubles as a USB flash key, allowing you to drag and drop both music and data files from any PC, with no accessories required. It also rectifies one of our big complaints with the previous version; its reliance on an AAA battery for power. The SA1335 has an internal, rechargeable battery that charges via the USB connection, making it both simpler and cheaper to run than the SA1100.

We found the SA1335's audio quality to be quite good. It did, in parts, sound a little flat, but for a small device it performed admirably. The included headphones did not do the unit any favours in this regard. Like most headphones pre-packaged with MP3 players, they sounded tinny and quite lifeless, with no bass presence and a lack of definition across all the ranges. Of course this is to be expected, and upon switching to a pair of third party headphones, the sound quality improved dramatically. We'd recommend factoring in the cost of another pair if you wish to purchase this device. Our testing also indicated the voice record function operated well, with great quality and good volume.

The SA1335 uses a fairly basic menu system, split between the music, radio and voice recording functions. Everything was easy to navigate and broken up clearly. The music controls are on the face of the unit and take the shape of a directional pad with a centre button, while along the top of the unit are the menu, record and loop buttons. The loop function is particularly interesting. Hitting it once marks a place in the track and hitting it again will loop the sound between those two points. While it is a unique inclusion, after using it for a minute or two, we really couldn't come up with many situations where it would be useful. We also had a few issues with the interface's responsiveness; sometimes the buttons would get stuck and not respond, meaning we had to press them multiple times to get a reaction. This wasn't a common problem, but it did occur several times during our testing and slowed down navigation.

All the usual music features were present, including repeat and shuffle play and a five-band equaliser. The SA1335 supports a fairly meagre array of file formats, covering just the basic MP3, WAV and WMA file types. It uses USB 2.0 and offers roughly 12 hours of battery life on a single charge.

Overall the SA1335 is a decent but not outstanding portable music player. We felt the price tag was a little high for a rather simple 1GB unit, but aside from its interface issues it does perform reasonably well.